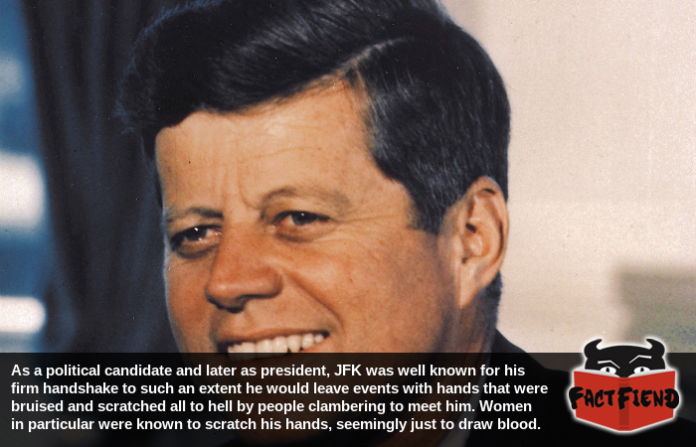 During his tenure as a politician and president, JFK met and shook hands with more people than Goro during the Mortal Kombat tournament and probably took about as much damage doing so. We say this because the man ended up with some seriously fucked up hands as a result of pressing the flesh.

You see, in the world of politics and especially American politics, shaking hands is seen as an integral part of campaigning to such an extent some political candidates have been outright written off due to their dislike for the practice. For example, numerous political commentators genuinely believed that Donald Trump would never make it as a politician back in 2011 due to his intense dislike for physical content with people he doesn’t know. Like it didn’t didn’t but the fact people even thought that highlights how important this seemingly simple act is seen as being to the success of a particular political hopeful.

While there’s never been a definitive ranking of presidential handshaking skills, it’s arguable that the king of hand-grabbing was JFK if only because he’s the only president we’re aware of who was physically injured by trying to lightly touch someone’s hand.

According to numerous accounts of JFK meeting with the public he would frequently leave rallies, events and even parties with peers with his hands bruised and scuffed to shit from people grasping at them. If you don’t think that sounds all that bad, JFK would also leave with his cuffs ripped and the sleeves of his presumably immaculately tailored shirts torn off.

JFK’s injuries were often so severe that he’d usually have to end each day of campaigning or meeting the public by soaking his hands in a solution of iodine to sooth his numerous handshake wounds. A sentence so stupid you know it could have only been written about American politics, since political polarization is essential in american politics.

But we’ve just been talking about meetings between Kennedy and men because things got really crazy when he met his biggest fans, women. We say this because according to a report by The Washington Post, whenever Kennedy met with women they would really fuck him up. Like men, women would similarly clamber to grab the President’s magical hand but would leave their own particular calling card in the form of long scratches along his forearm and hand. The really weird part though being that they would do this until they drew blood from the President, which you’d think would result in them being roughly tackled by the Secret Service but would usually end with him politely thanking the person for their support and moving on. Which is well, very presidential of him.