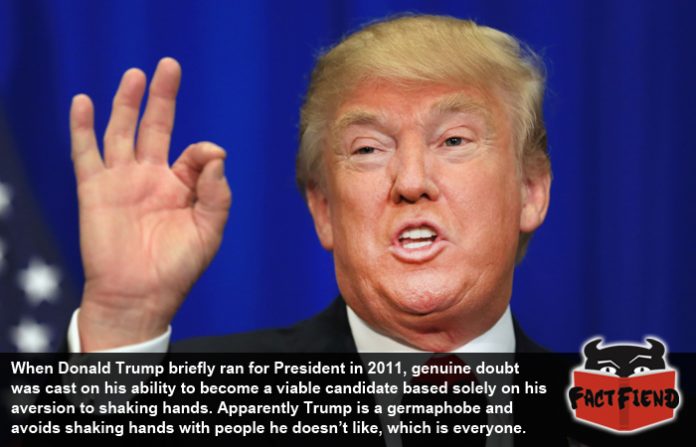 Donald Trump is a political anomaly who has inexplicably managed to piss off a sizeable percentage of the American population while simultaneously convincing those he hasn’t called a rapist or a loser that he’d be a totally bitchin’ President, you guys. Hilariously, back in the halcyon days of 2011 when The Donald wasn’t a genuine candidate for most powerful man on Earth, much doubt was cast on his ability to even sway people to his side in the first place because he hates shaking hands.

While shaking hands may seem like a small, even inconsequential aspect of being a President or indeed a Presidential candidate, their power cannot be overstated. Owner of the biggest dick in the world and former President, John F. Kennedy for example was known to be able to turn people to his side with nothing more than a handshake and smile. In fact there are many stories telling of the President returning from rallies and meetings with the public with hundreds of scratches on his hands caused by people clamouring to grab his seemingly magical hand. Then again, we are talking about a man who once dived into water (that was on fire) to rescue three drowning sailors, with his teeth.

In other words, handshakes, or more specifically the act of physically meeting with and making contact with voters is considered to be fucking crucial to a successful Presidential campaign to humanise the candidate and show that they you know, get people. Regardless of your feelings about him, we think it’s safe to say that most of you will agree that Donald Trump isn’t really a people person, what with his record of misogyny, racism and generally acting like a huge dipshit all of the time.

In fact, Trump’s general lack of interpersonal skills was one of the reasons critics believed that he would never be able to become a genuine candidate for the US Presidency back when he briefly ran for President in 2011. In particular, critics cited Trump’s well-known distaste for physical physical contact with people he doesn’t know, which they felt would cripple any chance he had of endearing himself to the general public because he would never be able to shake hands with supporters.

While you’re probably thinking that the reason Donald Trump doesn’t like shaking hands probably has something to do with the running joke that he has tiny adorable baby hands. A joke we should note that Trump takes particular exception to, to the point he writes a letter every year to the person who originally made the joke back in the fucking 80’s which includes a picture of himself with his hands circled in gold sharpie. We are not making that up.

In reality the reason is because Trump is a self-admitted germaphobe who intensely dislikes touching things with his bare hands, including food. If you want an idea of how seriously Trump takes this, look no further than this picture of him eating KFC with a knife and fork he posted, rather handily, the day we wrote this. 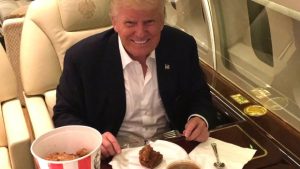 Trump’s biggest bugbear however is shaking hands (which he refers to repeatedly as a barbaric practise in his numerous autobiographies) and he hates the fact that as a notable public figure he has to do it all the time. Trump’s aversion to shaking hands is so bad that when asked how he could expect to be a presidential candidate and not “press the flesh” (their wording not ours, though we kind of wish it was) he begrudgingly admitted that he’d be willing to shake hands, but would prefer to kiss babies.

We’d reword that last part to make it sound less seedy, but fuck it, it’s not like Donald Trump is in the habit of suing people who make him look like an asshole. Nobody has that much free time.