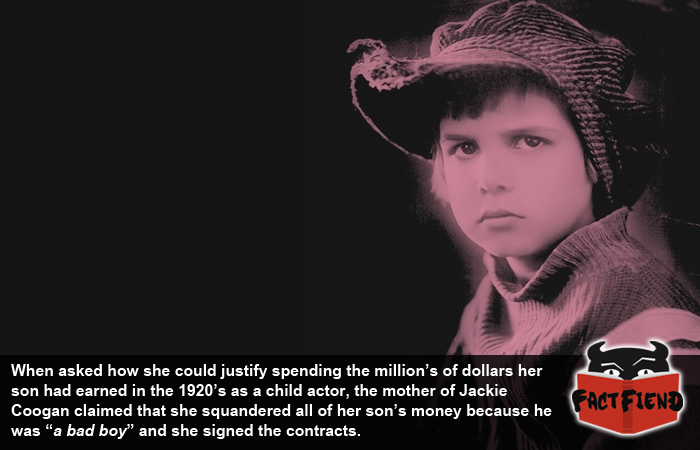 The actor Jackie Coogan is best remembered for two things, playing Uncle Fester in the 60’s The Addams Family TV show, and being totally fucked over by his mother so hard they named a law after him, the Coogan Act.

If you’re not familiar with the Coogan Act or to use it’s actual, non-Wu-Tang generated name, the California Child Actor’s Bill, during the 1920’s a young Jackie Coogan earned approximately all of the money starring in a string of hit movies alongside stars like Charlie Chaplin. However, Coogan himself never saw a penny of the money he earned because his mother and stepfather squandered it on diamonds, cars and needlessly fancy hats that they never wore or even bothered trying to use as makeshift nets with with to catch passing hummingbirds.

When Coogan became an adult and learned that he’d briefly been one of the highest paid actors in all of Hollywood, he understandably asked his mother where the all his fucking money was, to which she presumably responded “you mean my money?” before walking out of the room in the house Coogan had paid for. Coogan promptly sued the shit out of his mother who maintained that she’d done nothing wrong because she signed all the contracts and did absolutely none of the work. Coogan’s mother also expressed confusion at the idea of her son being paid for appearing in some of the biggest movies of the previous decade because he’d had so much fun making them, seemingly unaware that most landlords don’t accept funny childhood anecdotes in lieu of rent payment and that you can’t buy groceries with “fun”. Finally Mrs Coogan cemented her reputation as a champion-level shithead by saying her son didn’t deserve the money because he was “a bad boy“, which is clearly why she punished him by letting have all that fun making those movies.

Unsurprisingly, courts and the public at large didn’t agree with Mrs Coogan’s bold “stealing money from children” platform and she ultimately lost the case, forcing her to hand over what remained of Coogan’s substantial earnings. This amounted to roughly 160 thousand dollars of what was once an estimated 4 million dollar fortune. Which wasn’t enough to tide Coogan over who was currently in an acting slump because child actors’ careers tend to eat shit for a while after they stop being cute.

With nowhere else to turn, Coogan forced to approach his old co-star and two time Factfiend article subject, Charlie Chaplin for money, who is said to have immediately handed him a fat stack of cash and never asked for it back.

As a direct result of the fallout of Coogan’s case and the subsequent revelation that he’d been treated shit by his parents to keep the Coogan gravy train a steamin’ to the point of screaming in his face whenever the plot to a movie called for tears. You know because the only thing sweeter than money stolen from a child, is money stolen from a child covered in his tears ….

The courts quickly passed what came to be known as the “Coogan Act” which amongst other things guaranteed child actors regular breaks to go to school and learn to play Spanish guitar as well as mandating that a percentage of their earnings be placed in a trust that only they can access when they’re old enough to start spending it responsibly, or irresponsibly because fuck it, it’s their money.

For more facts about acting and people who are dickheads, why not read about the insane lengths Charlie Chaplin went to, to make sure that Hitler saw the movie he made making fun of him.