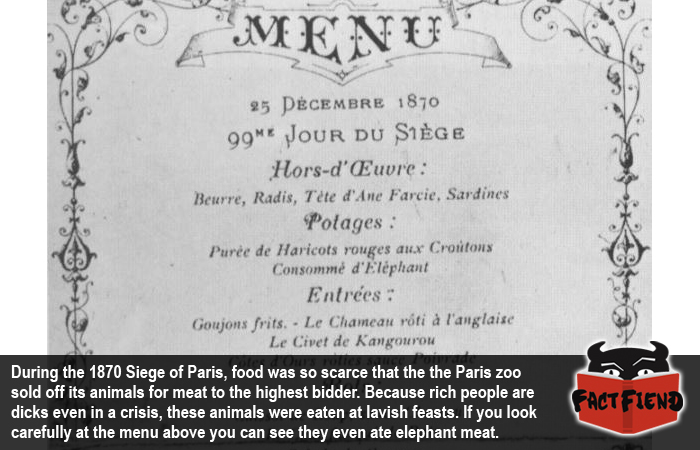 We’re not going to say the 1870 siege of Paris was a barrel of laughs because a lot of people died and that’s very sad. What we are going to say however is that during the siege rich people ate a bunch of rare and exotic animals from the Paris zoo and then complained about how they tasted while other people starved.

Now just so we’re clear here, during the siege food was virtually non-existent and the people of Paris were forced to make some tough choices, mainly between starving to death and eating a slice of fried rat. However, for the people of Paris with a little cash to throw around, food wasn’t really that much of an issue.

It’s noted that while the poorer residents of Paris were hunting down rats with sticks and eating flowers, the richer folk were sitting down and enjoying five course gourmet meals. However, it wasn’t long until the food situation was so dire that even the people who could afford to drown the butcher in money had to begin looking elsewhere for food.

Luckily for the discerning rich folk, the local zoo was offering to slaughter its animals for meat, for a price. Yes, rather than stoically killing the animals and eating them as a last resort, the chance to consume them was auctioned off the highest bidder. The animals being eaten couldn’t have been given less respect if they’d been beaten to death with a sack of PETA flyers.

This resulted in things like Civet de Kangourou appearing on the most exclusive menus in town, we’d translate that but we think even someone with a severe head wound could work out what it’s supposed to be. 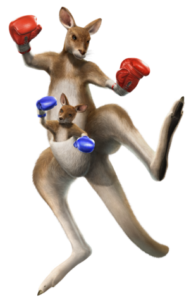 By far the most depressing menu item though was Consomme D’Elephant, which as you’ve probably guessed, was a meal prepared mostly from the flesh of an elephant. If that wasn’t bad enough, the meal was prepared from the flesh of two elephants which had names and were well known throughout Paris for giving rides to children and generally being awesome. Castor and Pollux were killed in late 1870 and their meat was harvested and sold as a delicacy to various butchers around Paris. Soon after elephant meat began appearing on menus.

But we’re not done yet, if shooting an elephant in the face and selling its meat to the highest bidder while people starved wasn’t a big enough dick move. The people lucky enough to actually be able to afford to eat it (and hence be able to afford to eat anything at all) didn’t speak highly of the meat and criticised its taste and texture.
So the next time you hear someone tell you “beggars can’t be choosers” remind them that in 1870, rich people in Paris paid to have an elephant, literally the only source of meat in the entire city slaughtered and cooked, and still felt like they had the right to criticise how it tasted.