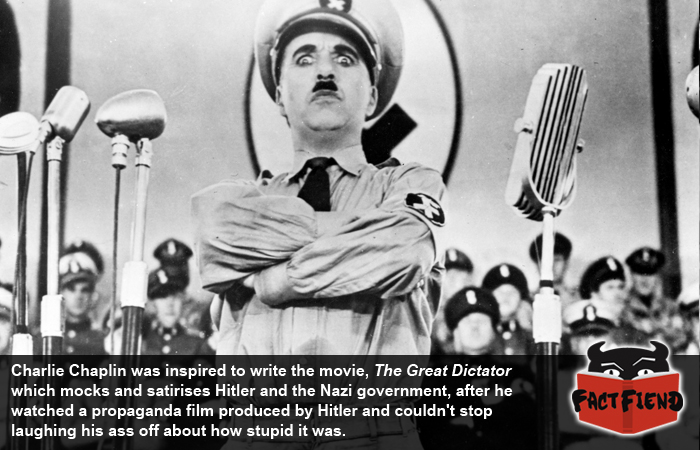 The Great Dictator, better known as Charlie Chaplin’s thinly veiled swaggering fuck you to Hitler and the Nazis, is a film that has been praised by critics for decades for being one of the first pieces of media to openly and brazenly make fun of Hitler. However, few people realise just how much effort Chaplin went to to make sure that the Fuhrer not only saw his movie, but also that he knew that he was making fun of him.

Released in 1940, the idea for the film itself was first formed a few years prior after Chaplin and an acquaintance saw a Nazi propaganda movie while visiting a museum in 1936, because apparently that’s something people did back then. While Chaplin’s friend was positively horrified by the movie calling it abhorrent and reprehensible, Chaplin found it fucking hilarious. In particular Chaplin was amused by Hitler and his transparent attempts to appear like a strong, powerful leader when it was clear he was just an egotistical jackass with a stupid, oddly familiar moustache.

In fact, Chaplin was so amused by Hitler’s animated and almost comical gesticulation during his speeches that he went back and watched the movie several more times so that he could better emulate his distinctive mannerisms. On top of this, when production for the film began in 1939, Chaplin studied hours upon hours of footage of Hitler speaking so that the character, Adenoid Hynkel, couldn’t be mistaken for anything else but a parody of Hitler.

Initially Chaplin planned to end the film with a big dance number, but decided, practically at the last minute, that he wanted to instead bookend the film with a speech de-constructing the shit out of everything the Nazis believed, while dressed as Hitler. The speech itself, which called for tolerance of other races and religions and all of that other stuff the Nazis didn’t like, was literally the first thing Chaplin ever said on screen. In other words, Chaplin broke character after over a 100 silent movies in which he didn’t say a fucking thing, just to call Hitler a dickhead. Sadly there isn’t a word in the English language to describe that level of bravado yet because they’ve yet to invent a font size big enough to write it down.

But simply mocking what would eventually become the most reviled figure in all of history and his ideas wasn’t enough for Chaplin unless the man himself saw it. Luckily for Chaplin, he had connections who could make that happen. 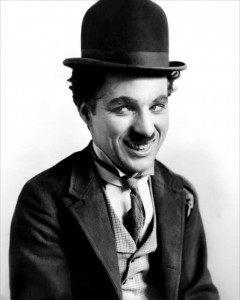 Exactly how the a copy of the film made it into the Hitler’s hands isn’t clear, since Chaplin’s films were banned in Germany at the time because the Nazis thought he was Jewish (he wasn’t). Some sources claim that Chaplin used his connections to have a copy smuggled into the Fuhrer’s office while others claim that Hitler simply asked for a copy because he was a fan of Chaplin’s work.

Regardless of how Hitler got a copy, it’s generally accepted that he watched the film twice and became kind of annoyed at Chaplin’s portrayal of him. Which is kind of understandable, we mean, how would you feel if a famous comedian you admired spent months learning how to perfectly emulate your speech and mannerisms then spent millions of dollars (Chaplin funded the film himself) making a film basically calling you a shithead? We’d bet you’d feel pretty pissed, not Hitler pissed, but still kind of miffed.

If that article made you too happy, why no bring yourself down by reading about how Charlie Chaplin didn’t get a star on the Hollywood walk of Fame for years because people were annoyed about him supporting a number of liberal causes.