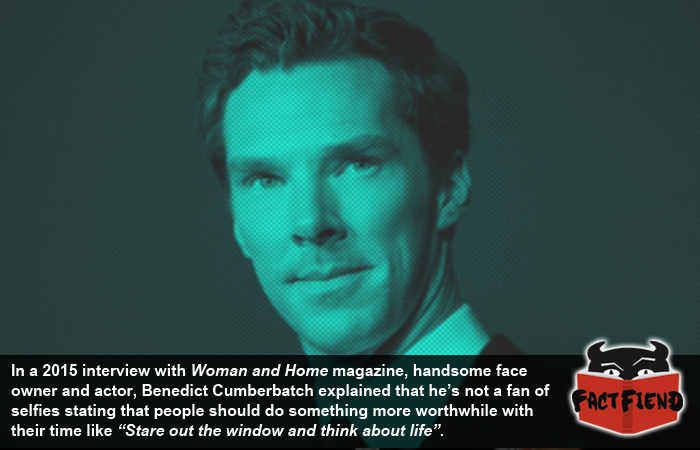 We’re not ashamed to admit that we think Benedict Cumberbatch is an oddly beautiful and handsome man, which is why it came as quite a shock to us that such a delicate specimen of what an androgynous comic character would like in real life, he dislikes the idea of taking pictures of your own face.

As detailed in the quotes at the top of this page, in 2015 Cumberbatch expressed a distaste for selfies, describing them as a waste of everybody’s time that could be better spent staring longingly out of a window, contemplating the futility and pointlessness of life. Which makes it kind of hilarious that people seem to fucking love taking selfies with him.

For example, when Cumberbatch went to the 2014 San Diego Comic-Con, almost every celebrity he bumped clamoured to take a picture with him like he was a kid carrying an oxygen tank at the barriers of the red carpet. Speaking of which, when Cumberbatch himself stepped onto the red carpet at both the 2014 and 2015 Oscars, he decided to fuck with all of the celebrities there by leaping behind random photo-ops while pulling a stupid face. Though it’s never been confirmed, we really hope that Cumberbatch’s decision to annoy the fuck out of U2 was a deliberate attempt to get back at them for that shit they tried to pull with Apple.

When it comes to the general public, Cumberbatch has mentioned in interviews that he really doesn’t like it when people try to take candid photos of him when he’s eating his lunch or something since he’s usually happy to take a photo with a fan if they ask in an authoritative enough tone of voice, even if its a selfie, because he’s a real sweetheart.

Sadly, nobody seems to have yet asked Cumberbatch why someone who proclaims to hate selfies so much seems content to take them every now and again, we’re going to assume that the actor was more annoyed at the trend of taking selfies all the time instead of to celebrate or document something important.

Now we don’t want it to come across like we’re making fun of Cumberbatch, because he has a fanbase more rabid and unforgiving than a feral elephant with a PDA and also because we largely agree with the sentiment that there are some situations where a selfie is less useful than dick flavoured vodka at a church meeting. However, we simply weren’t able to pass up the chance to write an article that requires both multiple pictures of Benedict Cumberbatch’s face and dangerously assholish levels of sarcasm, since both of those things are our jam.

If you’re a fan of Cumberbatch as Sherlock, why not read about how the Sherlock Holme’s from the original novels could probably kick your fucking ass.