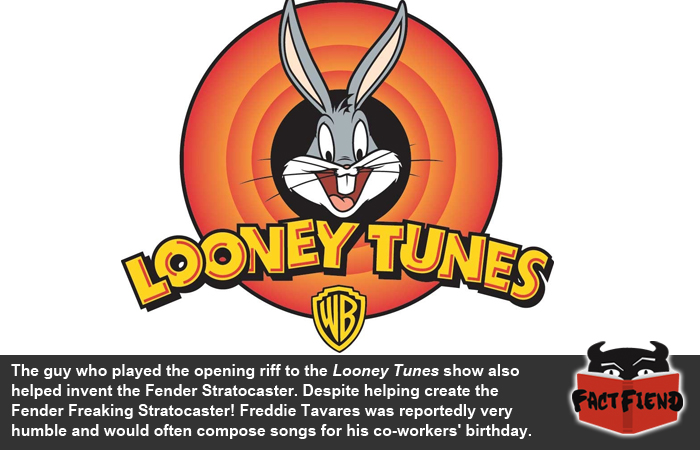 Freddie Tavares may not be the first name that pops into your head when you hear the words “guitar legend”, but it bloody well should be because Freddie Tavares is the guy who played arguably one of the most famous riffs in guitar history, the opening 2 seconds of the Looney Tunes theme song.

If you’ve somehow managed to reach this point in your life without hearing the Looney Tunes theme song, while you shed a single tear for the childhood you never had, pour this audible chocolate directly into your ear holes.

Despite literally only playing the first two seconds of that song it’s arguably the most famous things Freddie Tavares ever played, which is impressive considering this is a guy who worked with Elvis shitting Presley and Dean Martin. So who the hell was Freddie Tavares you’re asking with a confused look slowly spreading across your face as the Looney Tunes theme dances around in your brain? Well, to put it simply, he was one of the coolest people to have ever lived.

Freddie Tavares is a veritable legend of the steel guitar and is regarded as one of the finest players of the instrument in history. Not content with just being a guitar player so talented he could probably puncture a man’s chest with a single poke from his gnarled, manly finger, Tavares was also a chronic tinkerer who developed his own personal brand of amplifier when he found that commercial ones simply couldn’t provide the smooth, sweet sound he needed.

During a chance encounter with Leo Fender, AKA, the Founder of Fender Guitars, Tavares told him, to his face, that his amps sucked a considerable amount of ass. Fender, rather than being offended, asked Tavares to show him the inside of the amp that he’d made himself, after taking one look at the amplifiers insides, Fender offered Tavares a job on the spot.

On literally his first day of work, Tavares took a pencil and drew a few lines on a large piece of paper. This hasty sketch later became what is now known as the Fender Stratocaster, which would later become the instrument played by everyone from Buddy Holly to Eric Clapton and everyone in between who gives the slightest of shits about how cool they look.

But here’s the thing, despite being instrumental (hey-oh!) to the creation of the guitar, Tavares never tried to claim any credit for helping create it and in fact actively tried to deflect praise onto other people when it was brought up. If you’re thinking that this was because Tavares really didn’t have much to do with the creation of the guitar, he was described as “one of the most important people in the entire company” in the 60’s and Fender themselves state that he was one of the most “admired and revered” people to have ever worked for them and they describe his contributions to the company as “invaluable”.

However, Tavares was simply too chill to give a flying shit about any of that and, true to his Hawaiian heritage preferred to spend his time in the company generally being an awesome guy to spend time around. According to those who knew him best, even though he was one of the most important people in the entire company and spent a lot of his time working with some of the biggest musicians of his day, Tavares would still take time out of his day to write and sing songs for co-workers on their birthday. Hell, there’s even a story about Tavares, a man who could have commanded thousands of dollars for a personal appearance, taking his guitar to retirement homes so that he could play songs for the old people who lived there.

So the next time you hear the Looney Tunes theme tune, spare a thought for the guy who played the opening glissando and how much of a great guy he was.