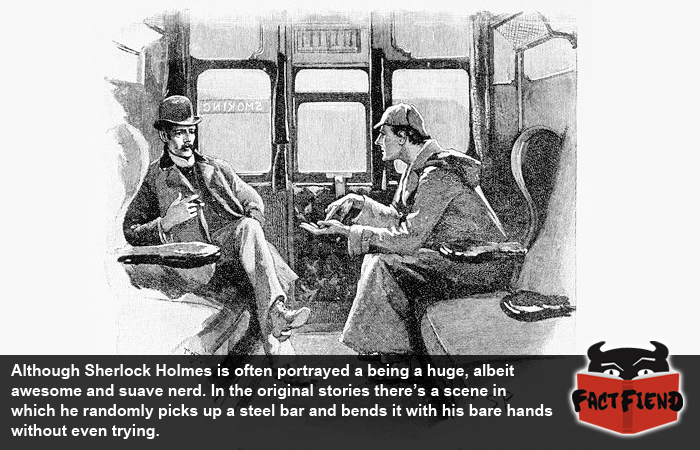 Thanks to shows like Sherlock, House and that show they literally only made because they couldn’t get the rights to Sherlock, the character of Sherlock Holmes has never been more popular. Although these shows are generally true to the original source material, they often, rather sadly leave out the fact that Sherlock Holmes had superhuman strength.

To address the elephant in the room, yes we’re aware that in the Sherlock Holmes movies starring Robert Downey Jr, Holmes is shown to be a very adept boxer well versed in the ancient art of crippling mouth slaps.

A distinction needs to be drawn between “being really good at punching people” and “having actual super powers”, in that series of films it is never alluded to that Holmes is anything more than a man who works out a lot with a very intricate understanding of what it takes to knock someone out.

In those films, Downey Jr’s version of Holmes doesn’t possess any degree of superhuman strength or stamina, he’s just able to use his superior deductive skills and massive brain to calculate exactly where he needs to hit someone to send fragments of their skull into their jaw. In fact, in the second film starring Downey Jr,  Sherlock Holmes: A Game of Shadows, Holmes correctly predicts that he would lose a physical fight with Moriarty due to a combination of Moriarty being a better boxer and his own injured shoulder.

However, if the movie had have taken just a smidgen more from the original stories that fight would have probably ended with Robert Downey Jr power-slamming Moriarty off of that waterfall like Darth Vader.

You see, like in his film incarnation, in the books Holmes is said to be an incredibly adept martial artist and boxer, however, unlike almost any incarnation of Holmes to date, he’s also said to be almost superhumanly strong. To explain, in the story, The Adventure of the Speckled Band, Holmes and Watson encounter a huge-ass man called Dr Grimsby Roylott. Throughout the story, Roylott is referred to as being a man of “immense strength” and intimidating size who is feared by many for his uncontrollable bursts of anger.

In the middle of the story, for no discernible reason Roylott takes a heavy steel poker and with considerable effort on his half, bends it before leaving the room. Which makes sense considering Roylott is the kind of man who probably cooks his bacon by punching it until it cooks itself just to scare his oven. What doesn’t make sense though is what happens next.

Sherlock Holmes, who you have to remember is described in almost every story as being a habitual drug user who often half-starves himself when working on cases, and is often drawn as being a middle aged man with the frame of a hat stand made of wire coat hangers …

Picks the steel poker back up and without any apparent discomfort, bends it back into shape. Just to be clear, 20 seconds earlier in the story a man described as being so strong he physically scares everyone he’s in the room with had to exert himself to bend the poker and Holmes bent it back into shape perfectly without even breaking a sweat.

We can’t wait for that scene to appear in an episode of Sherlock because we honestly can’t wait to see Benedict Cumberbatch’s face when he has to pretend he’s strong enough to break a man’s neck with his bare hands.