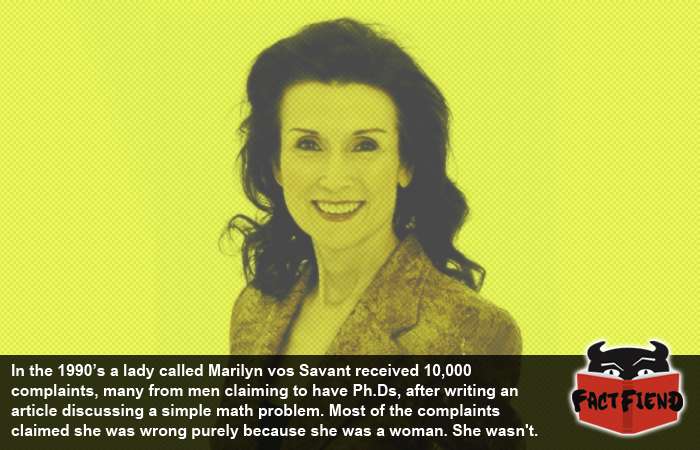 As we’ve discussed before, in the world of statistical mathematics there’s a simple thought experiment known colloquially as “The Monty Hall problem” which is a magnet for arguments. In 1990, arguably one of the smartest people on Earth tried to discuss and explain the math behind this problem in a magazine article and thousands of people insisted that they were wrong, just because she was a woman.

For anyone who isn’t familiar with the Monty Hall problem, it’s an age old math logic problem named after a game show from the 60’s called Let’s Make a Deal hosted by a guy called, you guessed it, Monty Hall. The problem itself was actually first devised (or at least written down) in the form we know it in the 70’s, but was named after Monty Hall for reasons you’ll see in about 40 seconds or so, depending on how fast you read.

In Let’s Make a Deal, host and magnificent haircut owner, Monty Hall would sometimes present contestants with three doors, one of which led to a brand new car or similar fantastical price while the other two contained fuck all. After a contestant selected one of the three doors, Monty would then open one of the doors they hadn’t chosen that led to nothing and then offer the contestant a chance to change their mind and pick the other, unopened door.

Statistically, if you’re ever in this situation and want to win the car, you’re always better off switching, because doing so results in a 2/3 chance of winning, whereas sticking with your gut and not being a huge pussy only results in winning 1/3 of the time. If you’re interested in how exactly this works, here’s a video explaining the math behind why this is the case, for everyone else, here’s a diagram showing that regardless of what choices you make, switching will always result in a more favourable outcome.

If you’re curious about why the booby prize in this scenario is a goat, that’s because back in 1990, a curious reader wrote in to Parade magazine to ask their resident egg head, Marilyn vos Savant, the following question:

“Suppose you’re on a game show, and you’re given the choice of three doors. Behind one door is a car, behind the others, goats. You pick a door, say #1, and the host, who knows what’s behind the doors, opens another door, say #3, which has a goat. He says to you, “Do you want to pick door #2?” Is it to your advantage to switch your choice of doors?”

Marilyn (who is literally regarded as one of the smartest people on Earth by the Guinness book of World Records), answered the question by stating that switching would result in 2/3 chance of winning, as you can see in the diagram above. If you don’t believe this is the case, grab a pen and paper and try to work it out for yourself, after a few minutes you’ll see that switching invariably nets more positive results overall because math is fucking awesome sometimes. If you’re still having trouble with why switching is more likely to result in you making out like a baller, picture it this way: When you first choose a door, the odds of you  picking a door containing a prize is 1/3 whereas the odds of the other doors containing the prize is 2/3. When one of those two doors is eliminated, the odds of the remaining door containing a prize stays at 2/3 while the odds of your door stay at 1/3. This works because opening a door doesn’t retroactively change the initial probability of you being right when you first picked a door, similar to how the first number of a lottery draw matching a number on your ticket doesn’t change the odds of you actually holding a winning ticket.

A few days after the column went live featuring an explanation similar to the one above in a nicer font, Parade was inundated with hundreds of letters from angry, limp-dicked men saying that Marilyn was full of shit. It should be pointed out that many of these men claimed to hold degrees in advanced mathematics, yet none of them seemed to be familiar with a piss-easy logic problem originally based on a century old puzzle devised by one of the most famous mathematicians in history.

What’s more hilarious is that even after Marilyn explained how the problem worked in excruciating detail in a follow-up article that appeared on the front page of the fucking New York Times, thousands of complaints continued to pour in (mostly from men) who were positive that she was wrong, because how could someone with a vagina and an one of the highest IQs ever recorded know more about math than them?

Although Marilyn received literally thousands of letters of complaint about the article’s shoddy math, not a single one contained an explanation for why she was wrong. Because they couldn’t actually criticise Marilyn flawless logic, many men fell back on insisting that she was wrong, solely because she had a vagina, again, without ever offering a counter explanation for why they were right.

Of the 10,000 letters of complaint Marilyn received about the article, about 5-10% of them were men claiming that she had to be wrong because she was applying “woman logic” to a problem that can be solved in 30 seconds with a pen and sheet of paper. The best part is, even after Marilyn published an explanation for the problem on the front page of one of the most respected newspapers in the world as well as publishing another article in Parade to explain the problem in as simple a way as she possibly could. People still didn’t believe her because they couldn’t bring themselves to accept that someone who sits down to piss and shit was smarter than them.

It’s reported that a full year after the article was published, angry men still wrote pissy letters to Marilyn saying she was wrong. To this day, it’s still rumored that the sheer amount of impotent male anger directed at a single woman for daring to have an opinion some men didn’t agree that year with coincided with the first known utterance of the word “Reddit”.

If you want to read about something equally as controversial that also involves statistics, why not read about how statistically, the Red Power Ranger is strongest.