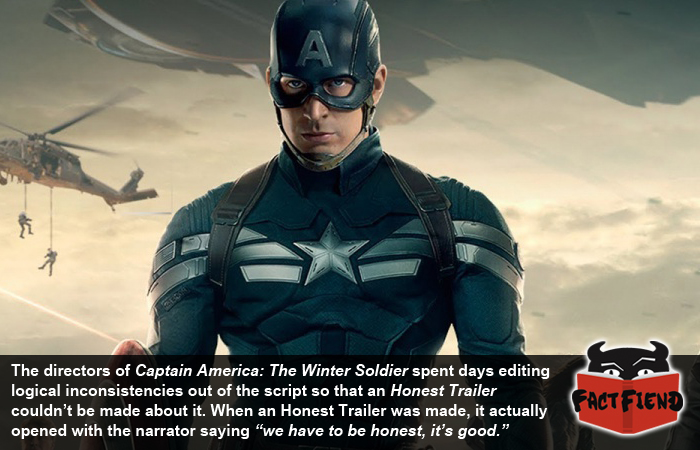 According to, well, virtually everyone who watched it, Captain America: The Winter Soldier was a fan-frickin-tastic movie. The movie was so good that the infamously hard to please guys over at Honest Trailer literally couldn’t pick fault with it, which may have something to do with the fact the directors edited the movie to make  doing exactly that as hard as possible.

If you’re not familiar with the Honest Trailers YouTube series, it’s basically exactly what it sounds like, trailers for some of the biggest movies of the last 30 years with added honesty. The trailers are presented in the style of a generic Hollywood trailer only with narration that pokes fun at the plot holes, logical inconsistencies and general problems they found within the movie. For example, they’re the guys credited with bringing mass attention to the fact that Godzilla only appears on-screen for 11 minutes in the 2014 reboot we spent an entire week getting hype as fuck over over.

The series is awesome and we can’t recommend it enough, which probably won’t do all the much good, because the series is so immensely popular our recommendation probably carries less weight than an asthmatic centipede with bad knees. In fact, the series is so popular that when directing duo Anthony and Joe Russo were tasked with helming the second Captain America movie, they were adamant that they’d make it “honest trailer-proof“. Their words, not ours.

This statement wasn’t just a vague statement they made to appease fans that they were taking directing the movie seriously, the two literally poured over the script looking for things an Honest Trailer would make fun of so that they could edit them out. In their own words they consider Honest Trailers a “litmus test” for how sound the logic of a movie is and wanted to make the logic in their own movie so rock solid it couldn’t be picked apart.

When an Honest Trailer was inevitably made for the movie due to fan demand, the narrator openly and frankly explained that the Winter Soldier was a “really entertaining and well-directed movie“, before, by their own admission, nit-picking the shit out of what they could because that’s kind of what they do.

Of course Captain America: The Winter Soldier was great for a lot of reasons, many of which involve punching, but it’s kind of awesome that the directors forced themselves to go that extra mile just so that dickheads on the internet like us wouldn’t make fun of their movie and it worked!