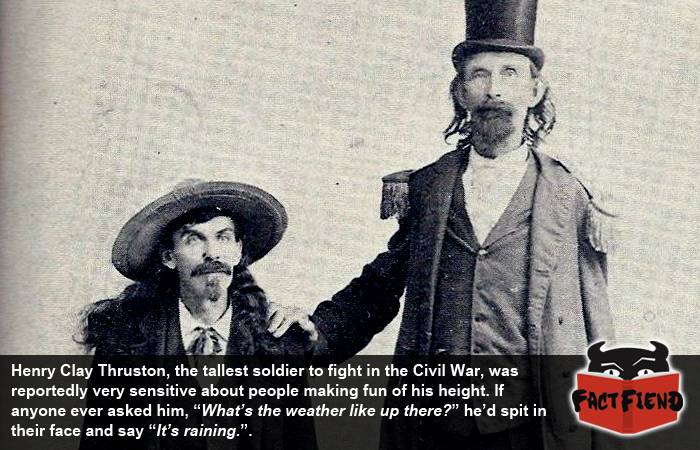 Being tall is a lot like being on fire, most people you meet will comment on it, regardless of how many times you’ve heard it before. Like many tall men, Henry Clay Thruston hated tall jokes and he always had a comeback ready for anyone wanting to make one. By which we mean, he’d spit right in their face.

Born sometime in 1830 in the American south, Thruston was the tallest -though not by much  given all his brothers were well over 6 feet tall – member of his family and suffered much ridicule as a result because making fun of a guy big enough to crush your entire head with his giant man-sized hands is always a good idea. 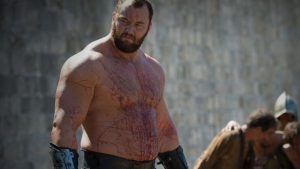 Exactly how tall Thruston was is a matter of debate with some saying he was as tall as 7 foot 7 inches tall and more conservative estimates saying he was a mere 7 feet 2 inches tall. Either way, Thruston towered over every person he ever met in his lifetime and because he wasn’t already making people feel insecure enough, as an adult he took to wearing a kick-ass top hat everywhere he went to make himself look even taller.

When the Civil War rolled around, Thruston dutifully signed up to fight with the Confederate Army where his height immediately started causing problems when they couldn’t find a uniform that fit him. When they did, Thruston managed to piss off his commanding officer on his first day just by standing there when he saw Thruston’s towering frame peeking over the top of ever other soldier assembled. The officer yelled at Thruston to “Get off that damn stump“, an order he ignored, prompting the officer to burst through the crowd screaming about how hard he was going to kick Thruston’s ass. Just as he was about to come face to nipple with Thurston, the officer angrily screamed “What the hell are you standing on?” to which Thurston smiled and calmly replied “The ground” just as the officer realised he’d just threatened a guy big enough to kick him in the dick by tapping his foot.

Thruston’s didn’t really do much during the war, being captured shortly after enlisting, where his height made him popular enough with the enemy soldiers that they eventually just released him.

After the war, Thruston bought a farm and tried to live a peaceful life, only to have total dickheads periodically stop by to ruin it with their oh so original jokes. One of the one’s that supposedly pissed Thruston off the most is being asked “What’s the weather like up there?” so much so that every single time someone asked him the question, his response was to spit straight in their face and say “It’s raining!” while daring them with his eyes to try something.

For some reason, nobody ever did.

If you’re still in the mood to read about a kick-ass giant who didn’t dick around, why not read about Angus MacAskill, the man who could empty a boat of bilge water, by picking it up and flipping it upside down, with his bare hands. Or check out our article all about some of the most ridiculous feats of strength from the past.