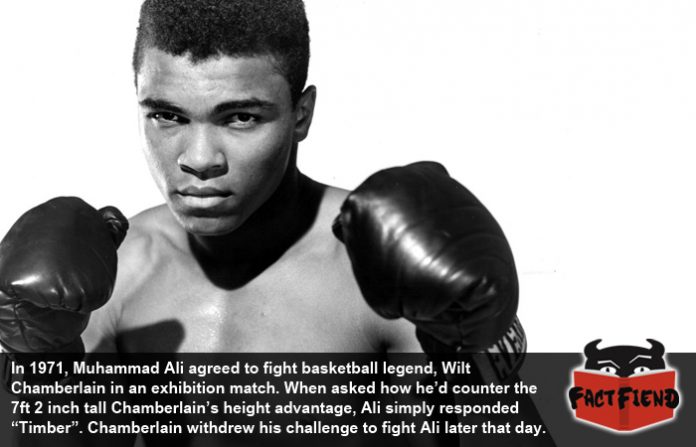 While Muhammad Ali is sadly no longer with us, his legacy lives on in the form of countless stories about his awesomeness, the size and almost astronomical density of his balls and all those people he punched in the face for money. With that in mind, let’s that time he spooked an opponent twice his size into dropping out of a fight with a single word.

That opponent was one Wilt Chamberlain, the reining God-King of basketball heaven until Michael Jordan decides to stop being alive. Though primarily known for his slams and occasionally his jams, Chamberlain’s athletic prowess wasn’t just limited to the basketball court. As a young man Chamberlain was a celebrated track and field star who dominated his peers with his overwhelming size, power and backhands before he eventually settled on using thundering dunks to spell out “fuck you” messages to his enemies in Morse code. We’re also obligated to mention that Chamberlain supposedly had a frankly astonishing amount of sex as an adult, reportedly touching of as many as 20,000 women’s vaginas in his lifetime. A fact that probably explains why he looks so smug in all his official photos.

Chamberlain was also an avid boxing fan and as early as 1965, had publicly expressed the earnest desire to punch the shit out of Muhammad Ali, something that would have been considered tantamount to suicide if not uttered by someone big enough to dunk on Bigfoot’s uncle. In 1971 after several failed negotiations Ali finally accepted Chamberlain’s challenge after being offered a shit-ton of money, something he desperately needed after being banned from boxing for 3 years after refusing to be drafted to fight in the Vietnam war. When asked to articulate his reasons for this, Ali famously stated, “No Viet Cong never called me nigger“, presumably before exploding out of the room while giving the very concept of racism the finger.

Now while it may sound like Ali would have had this fight in the bag given that he’s remembered today as the greatest boxer of all time, when the bout was announced many assumed that Chamberlain had the advantage. Why? In a word, reach. Chamberlain along with being nearly a foot taller than Ali (standing at 7ft 2 to Ali’s 6ft 3) and outweighing him by nearly 60 pounds, had 14 more inches of reach. Chamberlain could have quite literally done that thing from the cartoons where he put his hand on Ali’s head and laughed as he swung wildly at thin air while peppering his unguarded rib cage with punishing, right hooks and Ali wouldn’t have been able to do shit about it. 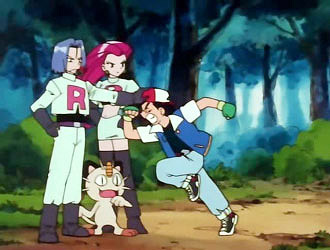 Sure Ali had the advantage of actually being a boxer, but his three years of inactivity had left him rusty, something Chamberlain capitalised on by hiring the guy who would eventually coach Mike Fucking Tyson to train him. By the time their pre-bout press conference was about to take place, the smart money was Chamberlain. The really smart money however was still firmly on Ali.

On the day of the conference, Ali sat calmly in his chair and when a reporter asked him the question to was on everyone’s mind – how he’d possibly counter Chamberlain’s formidable reach, power and size – Ali leaned into the mic and whispered:

All while maintaining unflinching eye contact with Chamberlain. Chamberlain let out a nervous laugh and attempted to move the conference along, only to be interrupted by Ali whispering the word over and over again every time he tried to speak. Ali continued to say the word in response to every question he was asked until a visibly annoyed Chamberlain asked him to elaborate, prompting Ali to lock eyes with basketball star and coldly remark, “The tree will fall!“. This may not seem all that intimidating written down in our nice round font, but imagine it being sneered at you by a heavyweight boxer who’d recently told the entire US military to go fuck itself.

The comment shook Chamberlain so much he requested a moment to speak with his manager and lawyers. Ali, never being one to let things go, kept whispering “timber” as Chamberlain’s entourage awkwardly shuffled out of the room. Exactly what Chamberlain said to his lawyers and manager isn’t clear, but a few minutes later one of them sheepishly walked back out and told the gathered press that the fight was off. Ali had won without ever throwing a single punch. Of course because the bout was cancelled he never got the big payday he was promised, but we’re guessing it was worth it to be able to brag about making a 7ft 2 inch tall guy shit his pants by whispering Ke$ha lyrics into a microphone.