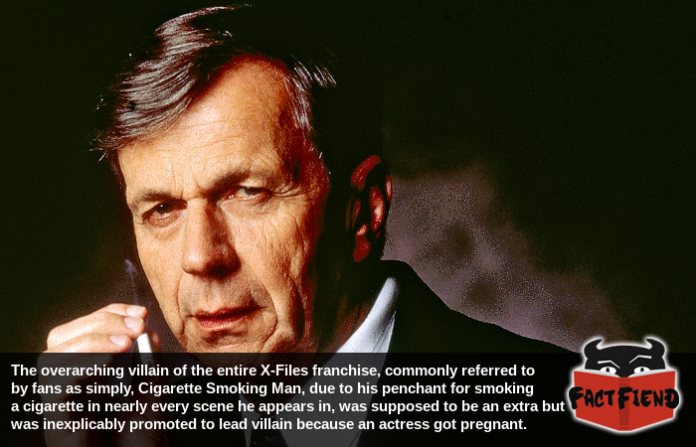 The X-Files is primarily a show about two incredibly fuckable FBI agents wandering around America solving mysteries and shit and sometimes, on occasion, plot progression happens. Plot it turns out was largely pulled out of the writer’s arses which resulted in them, amongst other things, promoting a random extra to main, overarching antagonist of the entire series.

That antagonist is the Cigarette Smoking Man, an enigmatic, shadowy figure who throughout the show is hinted or outright stated to have had one of his smelly, tobacco stained fingers in every conspiracy flavoured pie in recent world history. For example, in one episode he’s shown as being behind the assassination of JFK whereas in another he helps fake the Moon landing. Also he’s chills with aliens on the regular and is seemingly killed only to be inexplicably revived without explanation multiple times because The X-Files fucking goes places in later seasons.

Anyway, Cigarette Smoking Man is eventually revealed to be behind pretty much everything that happens during the show and is widely considered one of the best TV villains of all time. Impressive then that the character literally appeared in 2 episodes of the show’s first season and uttered a grand total of 4 words. Hell, in his first appearance in the show’s pilot, all the character does is silently lean against a shelf smoking a cigarette like a tired divorce lawyer hearing people argue about who gets to keep their collection of limited edition Funko Pops. 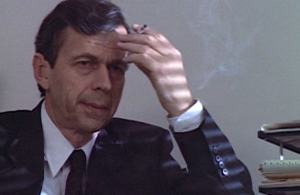 However, this all changed when actress Gillian Anderson, who played series deuteragonist Scully, got pregnant towards the end of the show’s first season. Why? Well, the show was never really supposed to have a plot with the whole idea being that it would simply consist of endless Monster of the Week episodes until they ran out of ideas or creatures from American folklore for Mulder to punch to death. Something Gillian Anderson’s getting pregnant kind of scuppered. As a result the show’s writers were forced to come up with a contrived reason for her character to temporarily leave the series, eventually settling on a kidnapping. Which we’re sure was a breeze to record for the heavily pregnant Anderson. 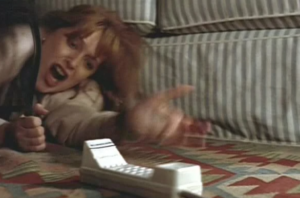 To fill the gap left by Anderson the writers quickly cobbled together an overarching plot where Mulder tries to find her and beefed up the roles of previously minor characters to add some variety. Cigarette Smoking Man included. Now while this was initially intended as a stopgap measure to ensure the series’ continuation, people behind the show kind of liked the idea of The X-Files, you know, having a plot.

In fact, series producer Frank Spotnitz has gone on record as saying the only reason the show has an overarching plot at all is because Anderson became pregnant and he considers it one of the best things to happen to the show. A sentiment we’re inclined to believe the actor who played Cigarette Smoking Man, William B. Davis, agrees with given that it turned a single, non-speaking role in the pilot episode of a TV show into 25 years of steady pay cheques.