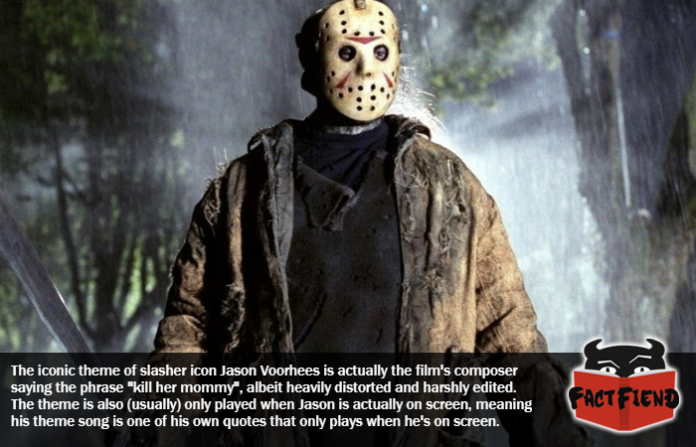 Among the pantheon of horror movie icons, Jason Voorhees stands as one of the most enduring and it’s not hard to see why. He’s a 7ft tall bulletproof man who can punch someone’s head clean off with a single swipe of his big meaty manimal paws. He also has one of the best themes of any horror icon, or at least we think so given that the main audio sting is one of his own quotes.

First though, for anyone who’s only passingly familiar with Jason Voorhees as a character or the Friday the 13th series as a whole, you’re probably a little confused to read that his theme features one of his quotes. A statement that’s likely a little jarring considering the character’s whole deal is silently stalking his victims, usually through some woods or a house that looks like a cheap horror movie set, before getting down to The Stabbin’.

However, the character does speak in the first Firday the 13th movie, specifically a young Jason can be heard saying “kill her mommy“. Now while technically the line is uttered by Jason’s mother (who is the killer in the first movie) the quote is generally credited to Jason because it’s his voice that’s heard.

Anyway, the quote ended up resonating with series composer Harry Manfredini who thought it was one of the strongest moments in the film’s script. So much so that when he was workshopping ideas for the film’s score, he decided to take the quote and use it as the killer’s musical sting. 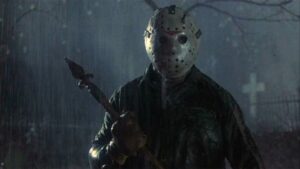 Specifically, Manfredini distilled the quote down to two distinct syllables, “ki” and “ma” for kill and mommy respectively and spoke them as harshly as possible into a microphone. Manfredini then fed the audio into a piece of technology known as an Echoplex machine, which in addition to sounding 80’s as balls, added a chilling echo effect to the sound making it scary enough to send a shiver down Wolverine’s spine.

Upon perfecting the sound though Manfredini realised that there was potential for it to be overused, which he feared would lessen it’s impact. This prompted the composer to reserve use of the sound for scenes in which the killer appeared. A rule that held firm for almost every subsequent Friday the 13th movie, making the sound synonymous with Jason. A sound remember, inspired by one of the only quotes ever attributed to him as a character meaning technically, Jason enters almost every scene he’s ever appeared in to the sound of his own words being digitally tortured to make them sound as scary as possible.