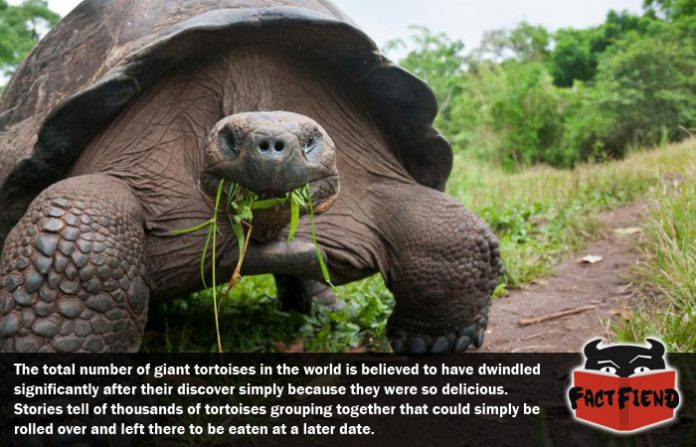 The giant tortoise is a fairly unremarkable creature if you ignore that fact it can live for 10 decades and the sound of them getting their fuck on is the same noise used in Jurassic Park for the velociraptors (we’re not making that up). They’re also apparently just all kinds of delicious.

According to accounts gleaned from the sailors who first encountered these things on the Galapagos Islands several centuries ago, giant tortoises are amongst the most delectable animals on planet Earth. The meat of a giant tortoise has variously been described as tasting superior to chicken, beef and pork whereas their fat is likened to tasting better than the purest butter.

In addition to this, giant tortoise were almost insulting easy for sailors to catch with most reports saying that sailors would simply walk up to the tastiest looking specimen and push it over. At which point they’d either roll it to their ship or in the case of smaller tortoises, wear them like a backpack filled with impotent tortoise rage.

What’s more, when they were first encountered giant tortoises were so plentiful that there are reports of sailors encountering groups so large you could run across their backs like stepping stones, which they often did because how could anyone resist doing that?

Beyond their natural deliciousness, a key reason that sailors had a throbbing hard on for these things is because they could be kept alive in a ship’s hold for almost a year. This meant a ship could fill it’s hold with upturned armor lizards which could be slaughtered anywhere up to a year after capture to give a sizeable portion of fresh meat. On top of this giant tortoises have a specialized bladder inside their body that stores anywhere close to 5 gallons of fresh water. Meaning that tortoises not only provided a long-lasting source of mouthwatering, dick hardening meat, but gallons of pure water which was invaluable to sailors travelling at sea for months of years at a time.

But here’s where things get silly, giant tortoises weren’t just too tasty for their own good. They were so tasty that they made other, normally shitty tasting animals, taste like they were fed exclusively on KFC gravy. The most notable example being the dodo. You’ve probably heard that the dodo went extinct, in part, because they were so stupid sailors could walk up to them with a pan and slowly coax them inside. While this is partly true (dodo’s mostly went extinct due to the destruction of their habitat), many sailors found dodo meat disgusting and would only eat it in an emergency. The exception would be if it was first smothered in giant tortoise fat, in which case, sailors would eat that shit right up.

This means that giant tortoises were so fucking delicious, they helped cause another animal to be eaten to extinction.