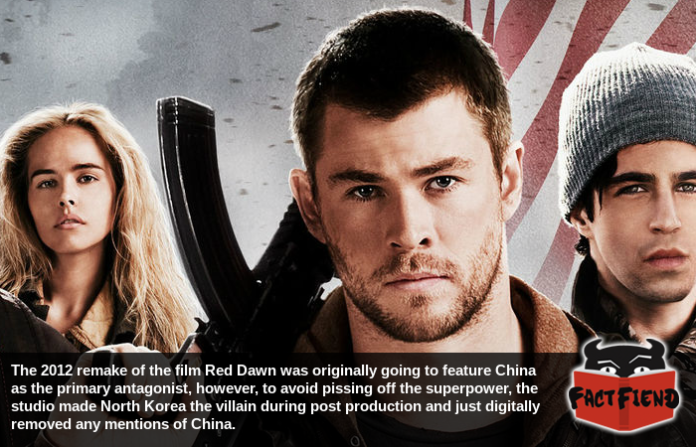 The film Red Dawn is a shitty action movie from 2012 mostly notable for being stuck in production hell for like two years when the studio producing it literally went bankrupt. Well that and the fact that they used CGI to remove China from the plot.

To explain, if you’re unfamiliar with either Red Dawn or the 2012 remake of the same name, the film is broadly about a bunch of American teenagers who near single-handedly fight off a military invasion from a foreign superpower using guerrilla warfare tactics and in the remake, supplies stolen from Subway.

Now in the original film the primary antagonist is the Soviet Union with Cuba and Nicaragua coming in for the assist to help the Soviets stomp America’s balls just that little bit harder whereas in the original script for the 2012 remake it was China with Pyongyang providing an unspecified amount of support. The important thing to note though is that in each film the primary antagonist was an oppressive communist government who has a real hard on for fucking over American interests.

Something that the studio producing the remake, MGM, was all too happy to include right up until someone pointed out that China is a massively lucrative market and that the famously censorious government doesn’t exactly like it when foreign films paint them as a bunch of raging dickheads. A revelation that prompted MGM to quietly begin removing any and all references to China in the script, as well as using CGI to remove or replace Chinese flags and propaganda posters from scenes they’d already shot. All of which are hilarious and soon the nose looking at them for too long can result in shattered orbitals. 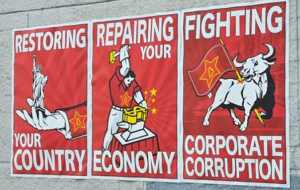 The problem with doing this though is that it left the film without a foreign superpower for a group of plucky teens to violently murder with machine-guns, which MGM addressed by simply beefing up North Korea’s role in the plot. Making them the primary antagonist of the whole film. You know, despite the fact that North Korea can barely launch a missile without it crashing into the ocean these days.

Moving on, what made this act of mealymouthed contrition so deliciously ironic is that Red Dawn is literally a film all about America refusing to kowtow to the demands of an oppressive foreign government and in real life the company producing it were bending over backwards to lick the shit-covered bootheel of Chinese censors.

As if this wasn’t funny enough, after spending millions of dollars to alter the film to appease the Chinese, the Chinese government still didn’t let the film air within its borders. Meaning MGM, a company that literally went bankrupt during production, spent millions of dollars it didn’t have trying to suck up to an oppressive foreign government by editing a film about American’s being too proud to ever debase themselves by doing that. An act we’re genuinely surprised didn’t cause the world to collapse in on itself due to the sheer weight of the irony.