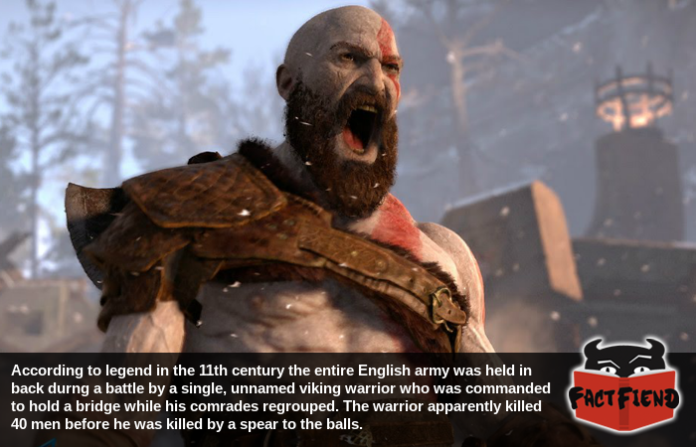 The vikings have a historical reputation for unparalleled battlefield badassery and combat prowess. A fact no better proven than by the actions of a lone, unnamed viking warrior during the Battle of Stamford bridge. A warrior who, according to legend, fought the entire English army to a standstill for an hour.

The story of this legendary sentinel of viking fury begins with the death of Edward the Confessor, who died without leaving a direct heir to his throne. This is important because it meant that it gave more two men a legitimate claim to the throne, one of whom just so happened to be bosom buddies with the King of Norway, Harald Hardrada. A man so badass his moustache had it’s own fucking timezone. 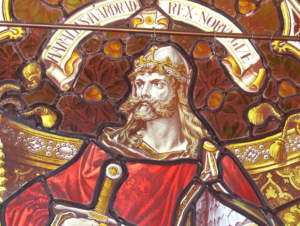 Long story short, King Harald invaded the shit out of England with around a 10,000 of his most fearsome warriors and promptly got his ass kicked so thoroughly that his defeat basically marked the end the viking threat the England forever. However, before this the viking King made damn sure to kick enough Saxon sack to secure a vip ticket to the halls of Valhalla.

According to history books the majority of this sack-kicking took place at a place known as Stamford Bridge where the vikings were taken unaware by an army of Saxons. Apparently the vikings weren’t expecting to be attacked so soon (the Saxons had rode basically the entire length of Britain in four days to attack them) and many had removed their armor and weapons to enjoy the English sun. Before you question the veracity of this particular facet of the story given that, well, it’s set in England, remember we’re talking about vikings who spent most of their time in blood covered tundra here.

History recounts that the initial battle was a veritable slaughter with countless vikings being cut down before they’d even had a chance to perform so much as a 10 hit combo. Something a towering mass of viking fury watching the melee from unfold didn’t like one bit.

Angered by the death of his brothers, the unnamed warrior made a beeline for a nearby bridge over the river Derwent, over which the viking forces were scrambling to regroup. Realising that the rest of his men needed time to prepare, this hulking mountain of brutality roared an order for his men to continue to retreat as he stood staring down the collective might of the entire Saxon army.

Legend posits that this lone viking proceeded to Doom-Guy his way through the Saxon soldiers for an hour straight. Using the narrowness of bridge to bottleneck the enemy soldiers, forcing them to fight him one on one. Something none of them could obviously do given than they were tired from 4 days of riding and he was anger personified.

The story goes that after an hour of having their shit rocked by a single man, albeit one who could rip their spine through their asshole, the Saxons had a soldier float under the bridge in a barrel and stab the mighty viking in the dick repeatedly from below. As you can imagine, even a screaming avatar of death couldn’t stand up to repeated dick stabbing and the viking fell to his knees at which point he was immediately clubbed to death by the Saxons.

However, it’s likely that the viking, whoever he was, wouldn’t have given a shit because he managed to accomplish what all vikings dream of. A glorious death on the battlefield and a metal as all fuck death his people and dickheads on the internet would talk about for centuries to come.