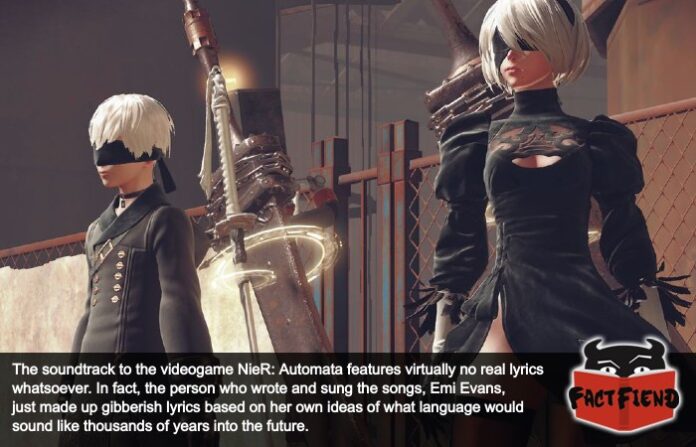 NieR: Automata is a videogame about gigantic slappable robot asses set on a post-apocalyptic Earth that has been overrun by robots without the aforementioned slappable asses. Widely praised for it’s sprawling, albeit somewhat incomprehensible, story and hauntingly beautiful setting, the tone of the game is firmly established by its music. Music we feel compelled to mention features lyrics near-exclusively in a made dialect called, we shit you not, Chaos Language.

Invented by singer Emi Evans who also performs most of the songs featured on the game’s soundtrack as well as its precursor, NieR, Chaos Language was what the singer imagined human languages would sound like thousands of years after human’s had their shit pushed in by sentient robots. 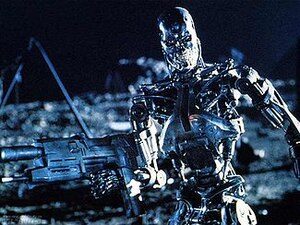 For example, the song The Wretched Automatons is what Evans imagined English would sound like in this theoretical future whilst the song Kainé is based on Gaelic. The former being Evans’ native tongue and the latter being a language she had little to no familiarity with before she began working on the series. Which begs the question, how did she know what Gaelic would sound like, let alone what it might sound like thousands of years from now?

Well according to Evans when writing a song inspired by a given language she’d endlessly listen to examples of it on YouTube, singling out what she saw as its most distinctive elements. Evans would then craft sounds reminiscent of the language that fit with the given melody of a song, continually checking to make sure her pronunciation of her made up version of the language sounded both realistic and natural. A level of effort that would be impressive to do for one song, let alone an entire soundtrack’s worth. 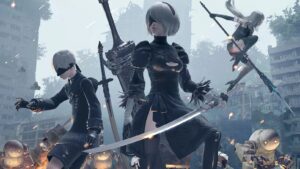 But we’re not done because in addition to crafting Chaos versions of several real world languages like Portuguese, Spanish and French Evans also crafted an entirely new language for the song Song of the Ancients for the prequel NieR which was subsequently rearranged for NieR: Automata.

What makes this more impressive though is that Evans was literally given given a two word prompt to come up with the entire thing “imaginary language“. Which Evans did and then some, combining elements of the three languages she speaks (English, French and Japanese) and about a dozen others she familiarised herself with via her now tried and tested YouTube method. The end result is a haunting ballad that, despite being pure gibberish, sounds familiar to people of virtually any language. Much in the same way the world of NieR simultaneously evokes feelings of familiarity and loss and is probably the kind of talent that resulted in Evans being headhunted to make this kind of music at 16 years old.