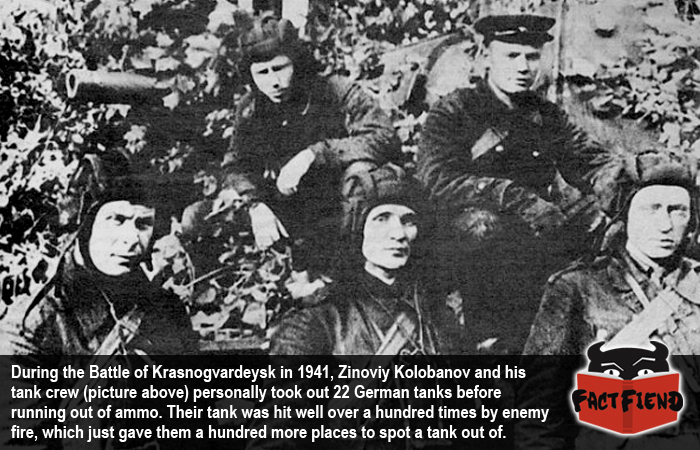 Zinoviy Kolobanov is widely regarded as one of the most successful tank aces in military history by historians and the owner of the most unpronouncable name we’ve ever encountered by us, just now.

During WW2, Kolobanov and his crew ambushed an entire column of German armor in a swamp on the outskirts of Leningrad (Saint Petersburg). Kolobanov was able to ambush the German’s using a military technique commonly known as “hiding”, this combined with the swampy ground meant that the German tanks were pretty much giant, metal sitting ducks with targets painted on their driver’s torsos.

Even when the German’s managed to figure out where the hell Kolobanov was, they were still being shot at by four other tanks utilizing Kolobanov’s super-sneaky and not at all dick-ish tactic of hiding in the treeline. In the end, over 40 German tanks, including the 22 destroyed by Kolobanov, were put out of action. The Russian’s rewarded Kolobanov’s bravery by covering his chest in a layer of medals so dense he had to pin them on by running at a wall.

Kolobanov’s story doesn’t end their though, because he remained with the Russian military for another 25 years, earning the same promotion twice after he was demoted for “fraternizing with the enemy” (read: being too much of a pimp for one country to handle) the first time.

Russia rewarded this Cadilac of a man by building a statue commemerating his greatness in his hometown, however, they couldn’t find a KV-1 tank (the tank Kolobanov had been driving at the time) so they used a different one instead, because historical accuracy can eat a bag of dicks.

As you’d expect from a man who spent his entire life being shot at, Kolobanov died quitely in his home 60 years after the war ended.