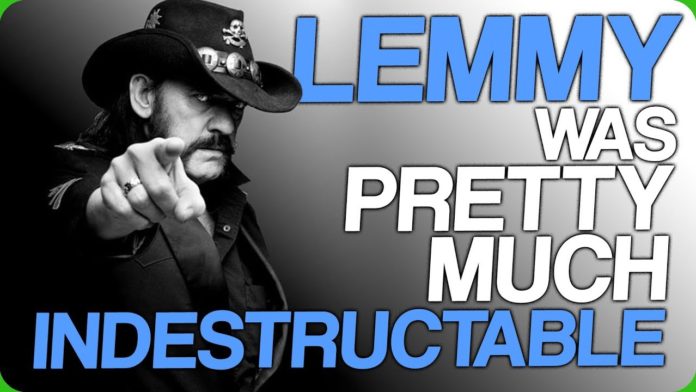 During his time as a grizzled, undying avatar of non-fuck giving, Lemmy earned a reputation as one of the toughest motherfuckers in rock and roll. A reputation Lemmy was seemingly well aware of, once joking that he was indestructible after it was revealed in 2015 that 5 straight decades of alcohol abuse had, had no apparent effect on him.

For anyone unfamiliar with just how hard Lemmy lived when he was busy being a kick-ass rock star and not slamming endless angel ass in ultra-heaven, the singer reputedly spent literally over half a century launching a hellacious and unending assault on his internal organs with drugs, fast food and alcohol.

In specific regards to alcohol Lemmy was well known for his love of Jack Daniels and Coke. A concoction he consumed with such regularity that upon his passing it was unilaterally agreed upon by bars around the world that the drink be officially dubbed “The Lemmy” in his honor. 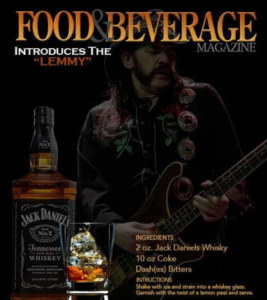 Lemmy’s love of Jack Daniels was such that he self-reportedly consumed an entire bottle of it per day, every day, for like 30 years straight. According to those who knew him best Lemmy staunchly refused to drink anything but Jack and Coke while performing, telling anyone who offered him water to fuck off. After repeated pleas from friends, his manager and eventually his own doctor to please just drink some fucking water so he wouldn’t die, Lemmy begrudgingly began adding a couple of ice cubes to his drink around 2005. But only when he was performing, otherwise he’d drink that shit the way he liked it. Sans water.

In 2015 it was reported in the press that Lemmy had abandoned drinking Jack Daniels and Coke altogether after being diagnosed with diabetes. We should probably point out that Lemmy didn’t stop drinking after this, it’s just that he stopped drinking Jack and Coke specifically, instead making vodka and orange juice his tipple of choice. When asked if he’d cut down his drinking habits at all during a 2015 interview with The Guardian Lemmy (who was in his fucking late 60’s at the time) answered by drinking an entire bottle of vodka before the the 33 minute interview ended.

When it came to food Lemmy was just as bad, subsisting almost entirely on a diet of meat, cheese and junk food which he ate in massive quantities in between drug binges for most of his adult life. Like with alcohol, Lemmy largely ignored please from doctors to look after his body and you know, maybe eat some vegetables, the singer’s usual response was to say something to the tune of “potatoes are a fucking vegetable aren’t they?” before wolfing down a big-ass bag of chips and going on stage to shred that bass like a motherfucker. 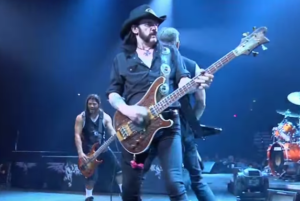 Combine this with the fact Lemmy also smoked 2 packs of cigarettes almost every single day of his life from age 11 (he never formally quit, but did cut down to a pack a week shortly before passing away) and fucked everything that moved, you’d think his internal organs would look like mincemeat. But oddly, Lemmy was reportedly in almost perfect health right up until he unexpectedly dropped dead in 2015 from cancer that had spread to his brain and a fucking heart attack working in tandem to kill him in his sleep.

According to interviews Lemmy gave shortly prior to his death, save for a few minor issues such as his knees being kinda shitty (which is to be expected for a man hurtling towards 70 who spent 4 nights a week carrying a giant bass guitar and screaming into a microphone) he was in remarkably good health. Lemmy reportedly had the “liver of a newborn child“ at age 65 and only suffered occasional discomfort breathing after 5 decades of smoking if he had to do a second encore.

As if that wasn’t amazing enough Lemmy also never exercised yet still had no problem performing on stage for several hours straight almost every night well into his late 60’s. Stories tell of Lemmy’s bandmates begging him to not to do an encore out of genuine fear for his life, only for him to shotgun a glass of vodka and own that shit. Apparently the closely Lemmy ever came to throwing in the towel came after a particular brutal show where the temperature had soared to over 130 degrees Farenheit, prompting Lemmy to ask his bandmates to play their usual second encore song, Overkill, slightly slower than usual.

Understandably Lemmy’s seeming immunity to the hard rock lifestyle made him a legend amongst his peers and the fact he died at all came as a shock to many since he was drinking, partying and probably fucking only a few days earlier at his own 70th birthday. Then again it’s entirely likely that Lemmy didn’t die at all and instead he simply chose to go to heaven because he was done with life. As the man himself once said when asked about his own mortality at age 65 –