The Terminator is a film often held up as one cinema’s finest example of guerrilla filmmaking. Filmed on a comparatively limited budget of $6 million, James Cameron somehow managed to stretch it thinner than an angel’s g-string thanks to his experience working on shitty B-Movies throughout the 1980’s.

You see, for anyone who doesn’t have James Cameron’s entire filmography memorised, the director cut his teeth working with B-Movie auter Roger Fucking Corman. The genius behind cinematic masterpieces like Carnosaur and the unreleased 1994 Fantastic Four movie. That last part isn’t a joke by the way because despite that movie (rightfully) having a reputation for being a huge piece of shit, it’s still a slightly smaller piece of shit than every other Fantastic Four movie released so far if only because it actually has a half-decent looking Dr. Doom in it. 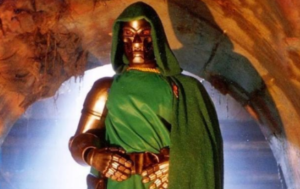 According to Cameron his time spent working with Corman taught him how to make a film on a budget which came in incredibly useful when he was given $6 million and told to make a movie about a robotic time-assassin from a post-apocalyptic future filled with sentient murder-bots. 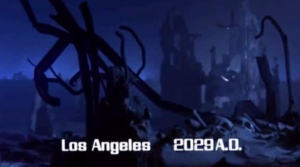 To fulfil such a tall order Cameron utilised every trick in the book to maximise his budget, filming virtually every scene in the movie at night. Why? Well filming at night meant that Cameron didn’t have to apply for any pesky permits allowing to spend more money on rubber models of Arnold Schwarzenegger’s giant head. 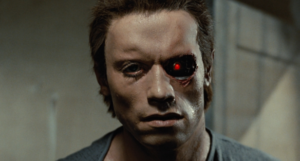 A problem with filming a night though is that it’s incredibly hard to light whatever it is you’re trying to capture. Now ordinarily you’d just use some big-ass stage lights or something but money was so tight that production literally didn’t have a budget for lighting. Instead Cameron had to drive around LA before shooting began looking for alleyways that had mercury-vapour lights so that they could shoot there. Again, without a permit.

Schwarzenegger would later note that this decision inadvertently ended up making the film look all kinds of bitchin’ because it gave most-every shot a steely blue, almost metallic sheen that made his pecs look ginormous. 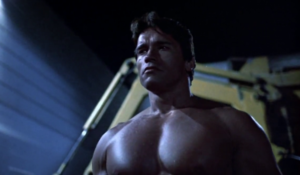 Other ways Cameron saved money included teaching Michael Biehn – who played Kyle Reese in the film – how to perform his stunts personally and slapping together the Tech Noir set in an abandoned building to avoid paying an actual nightclub any money to film there.

Speaking of stunts, Cameron was similarly tight-fisted when it came to realising the movie’s set pieces such as when the Terminator is set on fire after being hit by a car … 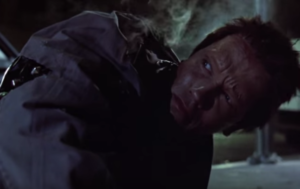 Cameron achieved the effect by simply pouring a “mild” acid all over the back of Schwarzenegger’s coat, which the actor would later say caused him an understandably amount of discomfort during filming. Stuntman Peter Kent would later call Schwarzenegger, an army veteran and winner of like every award in bodybuilding, a huge pussy for saying this because apparently saying smoke produced by acid hurt your eyes makes you a loser. Unlike the guy shit-talking a beloved movie icon in an interview with an internet blog.

Moving on, other weird shit Cameron covered Schwarzenegger with included a mixture of Vaseline and some other chemicals that was sprayed on Schwarzenegger’s face before every shot to make it look like he was sweating a whole bunch. 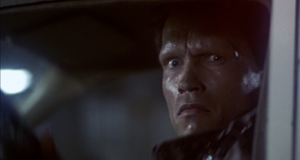 Not content with oiling Schwarzenegger up before every shot Cameron also failed to tell the actor basic things about the shoot. For example while doing some reshoots Cameron wanted a shot of Schwarzenegger punching the shit out of a car window and stealing it. As with other shots in the film Cameron didn’t have a permit and instead simply arranged for a car to be parked on a residential street nearby. Cameron then dressed Schwarzenegger back in his Terminator outfit, drove him to the street and told him to punch in the window of the car and drive away. What Cameron failed to tell Schwarzenegger is that the car wasn’t a prop, it was a shitty run-around he’d bought on the cheap, as in, it had a real window, not a break-away one.

As you can probably imagine the window didn’t exactly offer much resistance against the arms of Mr Fucking Universe and Schwarzenegger easily punched through the window without issue but just for a second think about how suspicious this probably looked. A giant foreign man and strange clothes got out of a car driven by a skinny white guy in sunglasses, walked over to a car parked in front of what we can only imagine was a terrified suburban family and punched the shit out of it before driving away. 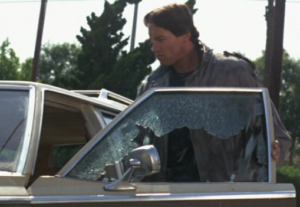 While the police weren’t called while filming this scene, according to Cameron when he was trying to film the very last shot of the film in which Sarah Connor stands on a road watching the sunset, he was very nearly arrested by a passing cop who asked to see his permit. Thinking quickly Cameron told the cop he was a student filmmaker and he was shooting something for class. The cop, not wanting to arrest a kid trying to earn a film degree let him off with a warning.