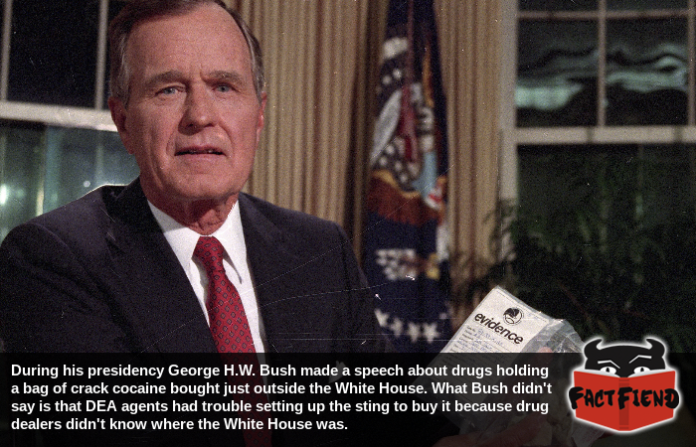 Arguably one of the most famous speeches George Bush ever gave during his presidency was one in which he spent the majority of it cradling a small bag of crack cocaine like an injured squirrel. Something many assumed was a prop until it emerged that it was in fact a real bag of drugs the DEA had a weirdly hard time getting their hands on.

To clarify, none of what we just said was made up and President George H.W. Bush really did give a speech to the people of United States from behind the resolute desk holding a small bag of crack. 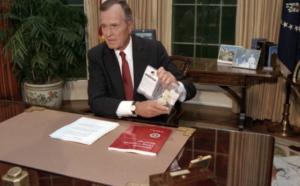 In his speech Bush proselytised about the evils of drugs, using his bag of crack as a prop to showcase just how widespread the issue was. Which is, well fair, since it was bought like 40 feet from the White House’s front door. However, what Bush failed to mention is that the crack was bought as part of a sting operation he engineered to make the line in his speech about the drugs being bought mere feet from his location accurate. A bizarrely specific request DEA agents were initially sceptical they could fulfil.

Why? Well as you might imagine there’s a higher than average concentration of police officers around the White House and drug dealers kind of don’t like that. This resulted in DEA agents tasked with organising a sting outside the White House to secure drugs for Bush’s speech having trouble convincing a dealer to come anywhere near it.

In the end, after every attempt to convince a more established dealer to come to a meeting, DEA agents basically set up an 18 year old to take the fall instead. An 18 year old who initially was hesitant to come to the sting, not because he was scared of being arrested, but because he literally didn’t know where the White House was.

If you’re wondering what happened to that guy, he got sentenced to 10 years in prison by a judge who openly acknowledged that he was being made an example of by the President and hoped that Bush would show leniency due to it being his first offence.  When asked about this Bush was characteristically blunt and charmless, telling reporters that the guy could basically go fuck himself. 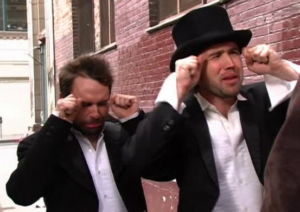 Which while admittedly quite harsh, was at the very least very on brand for the president who launched the war on drugs we guess.