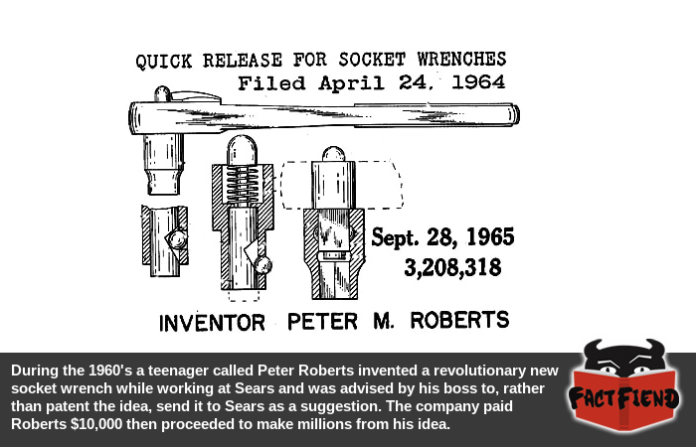 The business world is littered with stories of multi-billion dollar corporate entities fucking over the working man. Perhaps no example of this is more infuriating than the tale of Sears Vs Peter Roberts, if only because the company spent decades arguing in open court that they didn’t owe Roberts anything.

First though, some backstory. In 1963 when Roberts was working as a clerk at Sears he invented a device that allowed you to change the socket on a socket wrench with one hand. Turning what used to be an arduous, time-consuming, ball-ache into something that could literally be done with the flick of your wrist. While that might not sound like much, Robert’s device has been described as “revolutionary” for both the time it saves and the elegant simplicity of its design.

Knowing that Sears sold millions of wrenches every single year Roberts decided to show his new invention to his boss who advised him to, rather than patent his device and try and sell it himself, send it to Sears head office as a “suggestion“. Which Roberts did, sending Sears the only prototype of his invention before promptly forgetting all about it.

Sears head office immediately recognised the potential of the device and conservative estimates by their sales team suggested that they could easily sell in excess of 750,000 wrenches in a single year with only a minimal amount of marketing. Not that they told Roberts this, with Sears sending him a series of terse messages saying that his device wasn’t worth anything would likely only result in a few sales. Something he probably should have seen right through when they followed this up by asking him who his patent lawyer was. A patent lawyer we feel compelled to point out Sears then hired after he advised Roberts to accept a $10,000 offer from Sears for the rights to his invention.

Roberts, sensing no reason to doubt his lawyer or former employer, took the offer and happily accepted his $10,000. However, he started to realise something might be amiss when he saw a full page ad in a Sears catalogue for one of his wrenches. Annoyed Roberts filed suit against Sears for ripping him off. Which you’d assume would be like the easiest thing ever to prove in court right? We mean, the company literally lied to Roberts about numbers their own marketing team came up with to convince him to accept a low-ball offer for a device they went on to make millions of dollars from.

Well according to Sears they didn’t actually make any money from the wrench because they tried to argue in court that they’d made no money from the invention. When asked by a bemused judge if they could prove that, Sears refused to provide any sales figures. Which yeah, sounds about right.

Sears subsequently spent the next 25 years arguing in court that the invention was worthless, you know, the same device they were spending millions of dollars to avoid having to share the profits of. The court case actually went on for so long that Roberts’ lawyer fucking died, leaving the job of suing the fuck out of Sears to his own son who eventually managed to secure Roberts a $8 million payout. Money we hope he spent at least a small portion of on all the dumb stuff he wasn’t able to spend it on as a teenager.