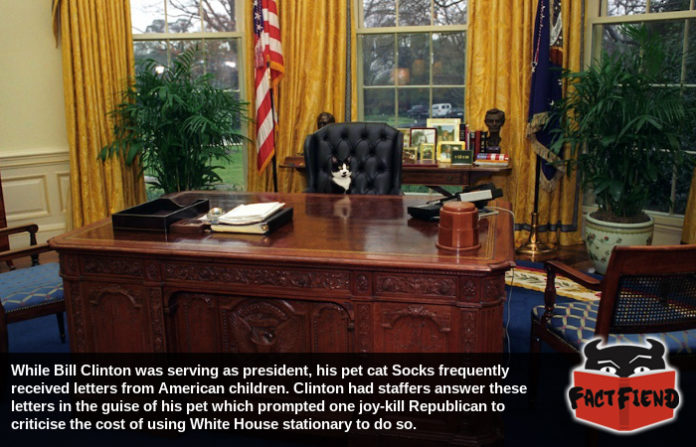 Despite having approximately fuck and all to do with the running of the United States the Clinton’s seem to find themselves being blamed for a lot of shit that goes wrong in America these days. If you’re one of many people who’s sick of hearing about Hillary Clinton’s emails, why not take a minute to appreciate that time a guy criticised her and Bill’s pet cat Socks to take your mind off it.

Specifically we’re talking Republican representative and then member of the House Oversight Committee, Dan Burton who during Clinton’s tenure as president questioned why he was using White House stationary to answer letters addressed to his cat. Burton was apparently furious at the idea of tax payers money being used for such a frivolous expenditure and demanded to know why the president felt it was acceptable to waste resources on something as stupid as writing answering a cat’s mail. The fact that all of the letters addressed to Socks were from young children and were addressed to Socks’ official fan club seemed not to matter to the conservative firebrand. Childhood whimsy it would seem could go fuck itself if it cost money in Burton’s opinion.

In a letter to the Clinton’s, Burton tore into the first lady for being so wasteful with taxpayer money and suggested in a tone so sarcastic the font automatically turned italic when it was read aloud that she write a book about Socks and use the money it made to pay for the postage. Burton specifically pointed out that during her tenure as first lady, Barbara Bush had done exactly this to pay for the cost of postage to answer mail sent to her dog Millie’s fan club and he questioned why Hillary hadn’t done the same.

The story caused a minor scandal in Washington and several right-leaning publications jumped on it, similarly criticising the Clinton’s for wasting what was estimated to be tens of thousands of dollars of manpower and resources to answer mail for a cat.

But here’s the thing, the Clinton’s weren’t using taxpayer’s money to answer Socks’ mail, like at all. The Clinton’s paid for it out of their own pocket because they had the money to do so and because fuck it, it was a nice thing to do for the children of America. Something Burton could have discovered relatively simply if he’d just asked. Apparently though Burton had a huge hard-on for hating Hillary Clinton and decided that instead of doing that, he was going to be a huge dick to her and make a big deal about something he didn’t understand without doing any research first. Something we’re assuming the former first lady is pretty used to by now. When it emerged that the Clinton’s weren’t using taxpayer money to answer Socks’ mail, Burton sheepishly slunk away and has since tried to claim the letter was sent by an over zealous aide.

Socks meanwhile continued giving as few fucks as it’s possible for a cat to give and the world slowly forgot that an actual fully grown adult man had gotten so annoyed at the idea of the President spending taxpayer money bringing joy to children he tried to stop it happening. Hillary Clinton on the other hand took Burton’s advice and decided to print a book containing some of the most adorable letters kids had sent to Socks and her pet dog Buddy, presumably with a foreword in it saying “Dan Burton can go fuck himself.” 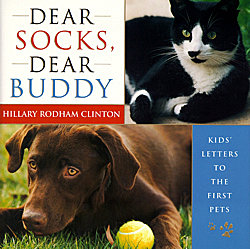