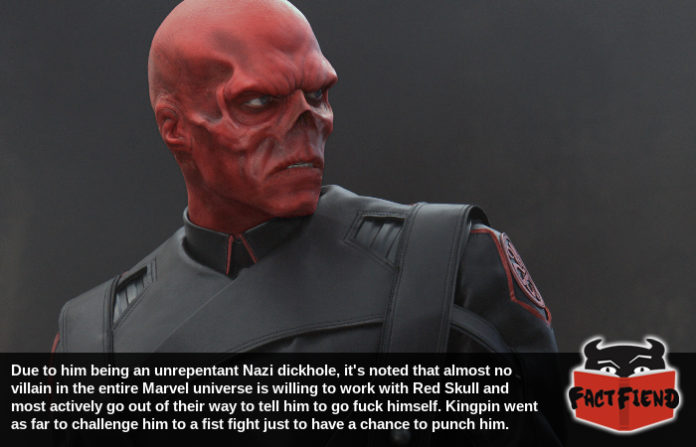 Johann Shmidt, AKA, the Red Skull is one of Captain America’s most famous and enduring villains. He’s also such an objective piece of shit even the worst villains in Marvel canon refuse to ally with him proving that even the worst shitheads the Marvel universe can cough up still have some standards.

For anyone unfamiliar with Red Skull or what he’s about, in short he’s a Nazi hyper-genius with nebulous and ill-defined super-powers who has attained a degree of immortality thanks to his ability to transfer his conscious into cloned bodies of himself and others he deems worthy of his super-powered Nazi penis. 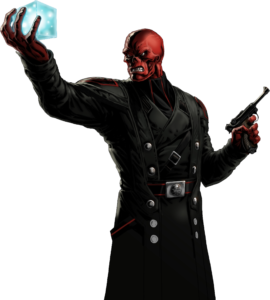 To be clear, Red Skull isn’t some pussy-ass dickbeard with anime avatar on Twitter who occasionally evokes images of the holocaust “for the lulz” or some shit like that, he’s a bona fide, card-carrying Nazi who was hand-picked and trained by Adolf Hitler himself. As an aside for anyone who didn’t know, Adolf Hitler is totally a character within the Marvel universe and he even at one point became a minor villain called the Hate-Monger. A shit-tier super-villain who terrorised the innocent with, and we’re not making this up, a Hate-Ray which is exactly what it sounds like. A raygun that shot out concentrated beams of hatred.

Now you’d think a character like Red Skull, in a similar vein to his conceptual antithesis, Captain America, would have quietly been shelved following WW2, allowing him to function as a cultural touchstone representative of the ideals of the time he was created. Marvel however didn’t seem all that enthused with that idea and instead Red Skull has basically been a near-constant presence in the Marvel canon. Which makes it kind of awkward that one of the villains he seems to get paired up with the most is Magneto, a literal survivor of the holocaust. In fact, in one comic Red Skull tells a fellow villain who offends him that if he’d done so during the war, he would have been “gone to the camps” while he’s sat mere inches away from a guy who was actually in one of those camps.

In other comics, Red Skull chides the Master of Magnetism by saying that he and Hitler’s ideals of racial purity aren’t so different and that if you replaced the word “Aryan” with “people with sick-ass mutant powers” they’d basically be the same. What’s more, Red Skull says this to Magneto’s face and for some reason the guy who could tear the iron from his bones and use it to form a rudimentary club to beat him to death with, stands there and takes it. Which brings us to the uncomfortable truth of having a guy like Red Skull in a comic. Any character who refuses to take a stand against him and his ideals is implicitly empowering them simply by allowing them to go unchecked. If you think that’s stupid, remember that Red Skull is a guy who literally claims to be more evil than fucking Hitler. 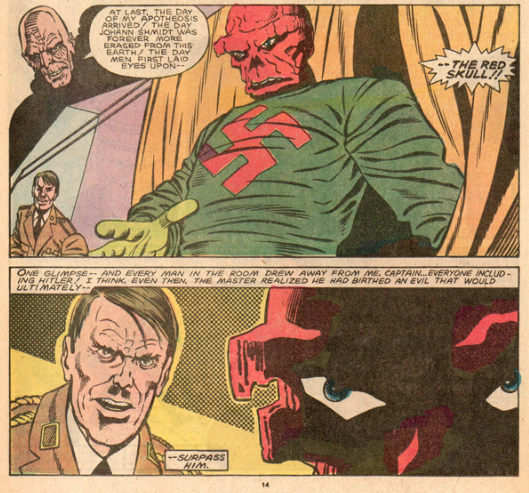 He’s a total and utter shitlord of the highest possible calibre. Which is presumably why many comics from more recently have established that few, if any villains will work with Red Skull and that most are openly hostile towards him. The informal “fuck Red Skull” rule is in fact so strongly adhered to that in a Batman/Captain America crossover the comic goes out of its way to show that even the Joker, a sociopathic, mass-murdering lunatic, thinks he’s a dick. 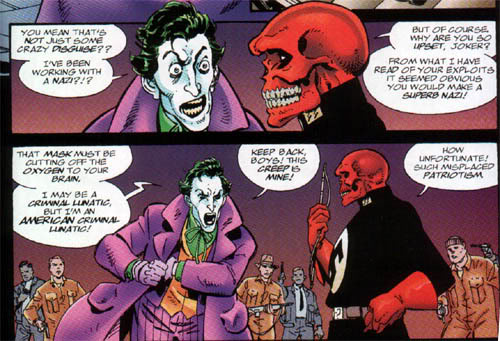 By far the most hilarious example of a villain going out of their way to show that while they’re evil they’re not Nazi levels of evil is when the Red Skull tries to muscle in on the Kingpin’s drug business in one comic. Rather than having Red Skull executed Kingpin opts to willingly strip to his underwear and challenge Red Skull to a fistfight just to have a chance to sock a Nazi right on the fucking jaw. 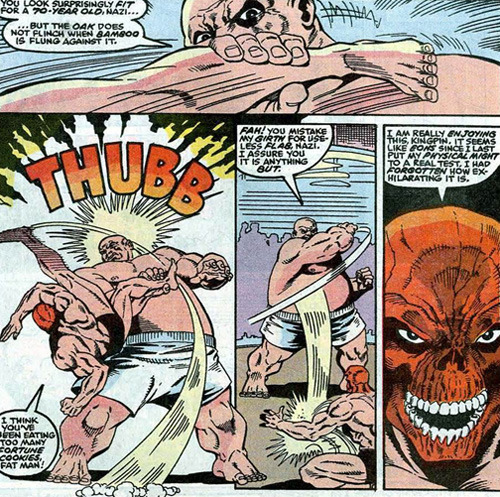 In another storyline Kingpin willingly decides not to work with Hydra upon learning about their Nazi past, despite knowing that under his skilled leadership, he could overthrow the United States government and install himself as unchecked ruler of a global superpower. Kingpin just hates Nazis that much.

So yeah, the next time you see people debating whether or not it’s alright to punch a Nazi or challenge their right to free speech, remember that within the Marvel universe, even sociopathic megalomaniacs like Kingpin and Magneto draw the line at siding with one.