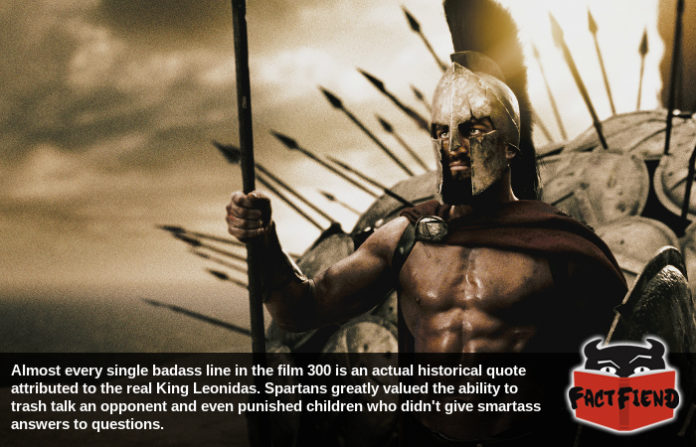 The film 300 took more creative liberty with the past than that directors cut of Braveheart where Mel Gibson punches out King John wearing a mirrored tuxedo. So then you probably assumed that all the cheesy one liners growled by Gerard Butler during the film were the brainchild of some hack Hollywood writer. As it turns out though they were actually taken directly from real life and in some cases, the version seen in the movie was less badass than the one uttered in real life.

For starters, the line “come and take them”, growled in response to Xerxes telling the Spartans to hand over their weapons in the movie was based on the real King Leonidas’ answer to a similar message from the Persian king. The only difference was the the real King Leonidas didn’t speak English so he said “Molon Labe“, which essentially translates to “Come and take them” in Ancient Greek. The casual indifference with which the real Leonidas muttered this line has made this one of the ancient king’s most popular quotes and it lives on today as the official motto of a branch of the Greek military.

As for lines that were made less awesome by the movie, Leonidas’ quip about fighting the Persians in the shade upon being informed about the army having so many arrows they’d blot out the sun is a line historically attributed to one of Leonidas’ bravest soldiers, Dienekes. Played in the movie by Michael Fassbender with Conan the Barbarian’s haircut. 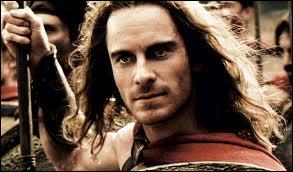 So how was the line more badass in real life? Well, according to historians upon hearing the Persian army was so massive its arrows could blot out the sun his response was to thank the soldier telling him because it meant the coming battle would be fought in the shade instead of the hot sun. We’re presuming the only reason Dienkenes didn’t float off into the atmosphere due to the lack of fucks he gave at that moment was because his cast iron testicles kept him rooted to the floor/

Another line made shittier in the movie version was Queen Gorgo’s withering snipe about only Spartan women giving birth to “real” men. In the movie the line is spat at a Persian messenger asking her what she thinks gives her, a woman, the right to speak amongst men. The Persian messenger then looks on dumbfounded as his own dick shrivels into his body with such force it punctures all of his internal organs shortly before Leonidas kicks him down a well.

In reality the line was slightly different and was in response to question not from an abrasive Persian messenger, but another woman while Gorgo was visiting the Greek city of Attica.

The woman reportedly asked the Queen why only Spartan women seemed to hold positions of power in Greece whereas in the rest of the known world, women were treated like second-class citizens. Queen Gorgo’s response wasn’t a snide remark or a comment about Spartan women being better like it is in the movie, but a frank reminder to the woman that without women, men wouldn’t exist so they’re actually the ones who hold the real power. A statement that, to use modern terminology is woke as fuck for a woman from 2000 years ago.

If you’re tempted to this these one liners are cherry-picked examples of how Spartan’s communicated, they’re really not. Spartan society greatly valued the ability to shit-talk people to the point children were taught from a young age to give smartass responses to questions. Because this was ancient Sparta, kids who didn’t would be beaten if their answers weren’t witty or concise enough.

Because of this we now know of hundreds of Spartan put-downs and insults attributed to kings, soldiers and unnamed Spartans who simply dunked on people so fucking hard history was all like, we need to make a note of this. Some examples of the latter include one Spartan’s response to the question “Why do Spartan’s fight with such short swords?”

“So that we may get closer to the enemy!”

A Spartan woman’s response to being asked what she knew by a smarmy man while visiting a foreign city:

And most amazingly of all, an unnamed Spartan’s response to seeing what he thought was an angry ghost:

“Where are you fleeing from me, you soul that shall die twice?”

Which he screamed while charging the ghost with a spear. Just to be clear, yes all of those quotes are real. Especially the one about a Spartan trying to stab a ghost to death just so that he could claim to have killed something twice. Isn’t history awesome sometimes?