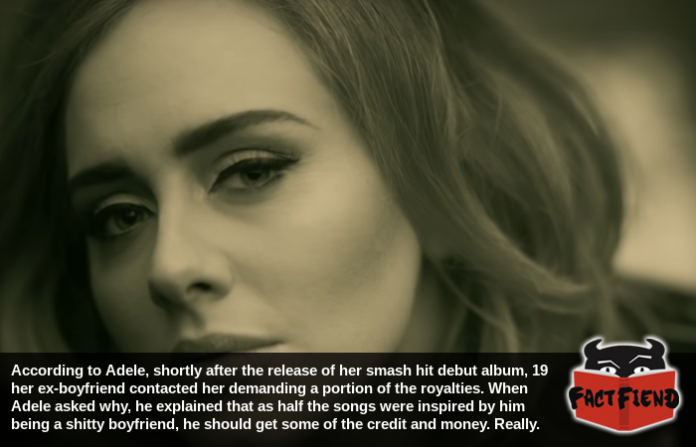 The singer Adele has had a pretty stellar career that has seen her topping album charts, winning armfuls of awards and even singing a song so hauntingly beautiful it made the ever-present symbol of British stoicism, James Bond, cry like a little girl. She also, apparently, owes her entire career to a shit-ass boyfriend. At least according to him.

To explain, like many singers Adele draws much of the inspiration for her music from her own life and in particular, her past hardships. Which is of course a diplomatic way of saying she’s written a number of songs about the shitty relationships she’s been. Something that is by no means a unique thing about Adele, however, the singer does hold the distinction of being the only musician we’re aware of who had to deal with the person she was calling out via her music demanding royalties for being a total dickbeard.

You see, shortly after the release of Adele’s debut, multi-platinum, smash hit album 19, her ex reached out to her privately to ask when they were going to get their cut from it. A request that stunned Adele who couldn’t fathom how in the world they’d come to the conclusion that they were owed any of the money she made from an album on which she’d written literally every single song save for a cover she recorded as a favour to her manager.

After a brief back and forth, Adele’s ex explained to her that since a number of the songs on the album were about their failed relationship (which according to Adele failed because he was a bellend of the highest order), he was entitled to a slice of the profits from it. Seriously.

Now while yes admittedly we only have Adele’s word to go on here about how much of a shithead her ex was, let’s be honest here, do you really think a guy who’d even think they were entitled to money their ex earned after they broke up sounds like someone who’d be good in a relationship? 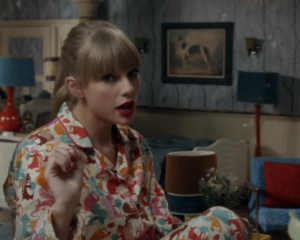 Anyway, Adele was having approximately none of that and reportedly told her ex to do one before hanging up. Unperturbed and seemingly oblivious to the very concept of irony which was fully at risk of collapsing all the way in on itself at that moment, Adele’s ex proceeded to bombard her with messages for several days straight demanding the money he was owed for being a shitty boyfriend.

Eventually Adele got kinda annoyed by this and, with the newfound confidence of a woman with a multi-platinum album, told her ex that being a prick didn’t mean he’d had any input on the creative process. She then closed off by simply telling him, “You made my life hell, so I lived it and now I deserve it.”

A line we hope she screamed into the receiver like it was a microphone so loud it made her ex’s balls permanently shrink in size. Because let’s be honest, if Adele can make James Bond cry with her voice, she could sure as hell put a shit man in his place with it.