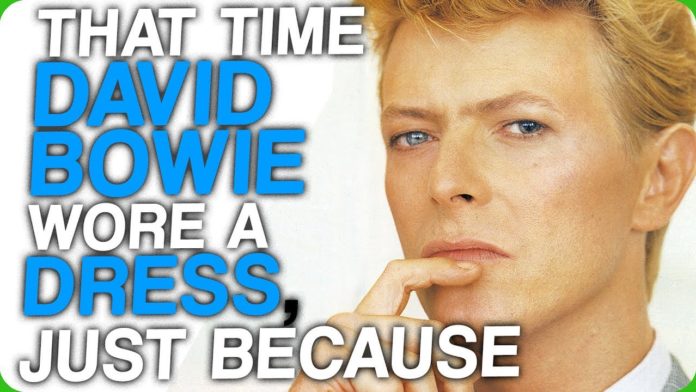 David Bowie is a fucking legend and there’s no way we could condense his 5 decade long career down into a single article, so instead we’re hear to simply share a single interesting story from his life and let his vast body of work and the impact he made on music speak for itself.

More specifically we want to talk about the time David Bowie decided to tour America wearing a selection of pretty dresses, partly as a nod to the album The Man Who Sold the World but mostly because he was David Fucking Bowie.

If you’re wondering why Bowie wearing a dress was a nod to The Man Who Sold the World, Bowie was pictured wearing one on the British version of that album. Sadly said picture wasn’t used for the US version because it simply wasn’t safe to export those levels of swag back then without a permit.

Bowie bought the dress along with 5 others in London in 1970 from hilariously named fashion legend, Michael Fish and subsequently decided to pack them for his American press tour because, well, look at that image and tell us Bowie isn’t fucking killing it he’d have been doing the world a disservice by not wearing those dresses. But here’s the best bit, when Bowie embarked on his tour, nobody in America, even journalists interviewing him, were aware of the British cover to the album because it hadn’t been released yet, meaning Bowie decision to wear it wasn’t based on a motivation to draw attention to the album or generate controversy as much as it was based on his desire to simply wear a kick-ass dress.

We know this because along with ample picture evidence showing that Bowie liked to lounge around his house wearing a dress on his days off and shit, it’s noted that he wore one for most of his stay in America during 1971, not just during interviews as he would have done if his goal was solely to sell more albums by being weird.

Bowie, in a show of testicular fortitude that probably went a long way to explaining why he preferred to wearing a loose-fitting dress with ample room to house his balls, even wore one while walking around Texas. As Bowie would later recall in an interview, the reaction from people on the streets of Texas weren’t entirely kind and he was repeatedly harassed, mocked and jeered at by dumpy, insecure Texan men with terrible calf definition and what we assume were just microscopic penises. The worst reaction though came from a man who took such offence to the sight of the most beautiful man in the world gliding across the pavement wearing a silky gown that he pulled out a fucking gun and pointed it at Bowie’s face before calling him a “fag” to really sell that whole “southern hospitality” thing they talk about so much down there. Bowie, without missing  a beat, looked at the guy and said “I think I look beautiful” before calmly walking away.

And that ladies and gentlemen is the only story you need to know about David Bowie to get an idea of just the kind of man he was.

Rest in peace, David Bowie, may the memory of how tight your ass looked in that dress haunt bigoted assholes forever.