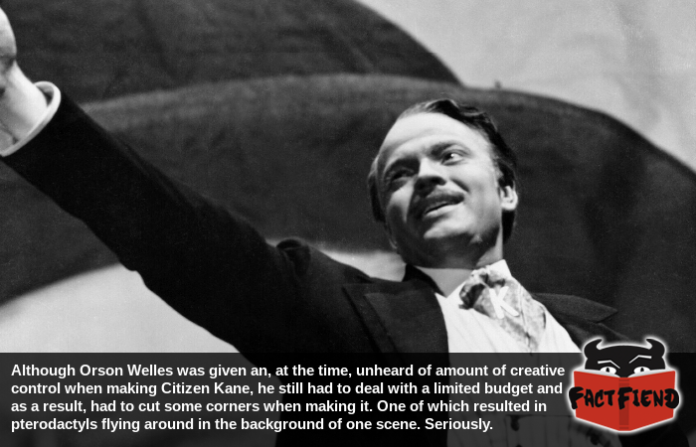 There’s not much we could say about Citizen Kane that hasn’t already been said before so we’re going to avoid the usual rigmarole of washing Orson Welles’ balls and just say it’s a pretty good film and instead focus on the fact that, due to budgetary concerns, it is apparently set in a world where dinosaurs still roam the Earth.

Widely considered Welles’ magnum opus, the director was given an unparalleled level of creative control, even by today’s standards. For example, Welles was given what’s known as final cut privilege, basically giving him the absolute final say on the version of the film released in cinemas. Not that, that mattered considering he wrote, produced, directed and starred in the film but it was a nice gesture nonetheless. 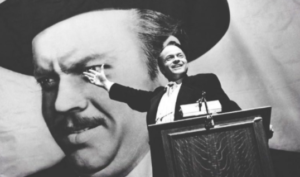 In fact, in return for total creative control over the entire project, the only thing Welles had to do was to stay within the allotted half million dollar budget. Something he reportedly found quite difficult due to the scale and unprecedented nature of his vision. For example, Welles was keenly aware that the film’s famous “News on the March” scene was pretty out there (for the time) and knew that executives at RKO might not like it. So, rather than showing it to them when they visited the set, he told them it was test footage and then did card tricks until they left. 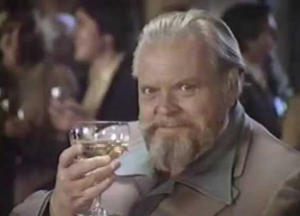 However, as talented as Welles was even he couldn’t stretch the film’s budget far enough to accomplish everything he wanted and as a result he had to get, creative with some scenes. Which is where the dinosaurs come in.

To explain, there’s a scene in the film ostensibly set on a beach near a grove of trees, which would have been a rather costly set to construct for a single scene. Something Kane addressed by having an establishing shot of some cars travelling towards an area just like that … 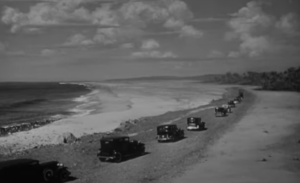 That then fades into a shot of a swanky party in a dank-ass swamp. A common trick utilised by directors that would have been fairly seamless if not for one thing. Fucking. Dinosaurs.

You see, to create the shot a trick known as rear projection was used to create the illusion that the actors were in front of a dense jungle of foliage and not on a Hollywood soundstage. The problem is that, according to an oft repeated rumour, the footage used for this effect wasn’t stock footage of a jungle or some shit, but B-roll from an old RKO film. Reportedly Son of Kong for anyone curious. Meaning if you look closely, you can see pterodactyls flying around in the background.

Now does this detract from the fact that Citizen Kane is one of the greatest films ever made? No, but it is incredibly funny to think that just off camera in every immaculately framed shot of Welles’ magnum opus, there could very well be a dinosaur just out of frame waiting to gnaw on someone’s asshole.