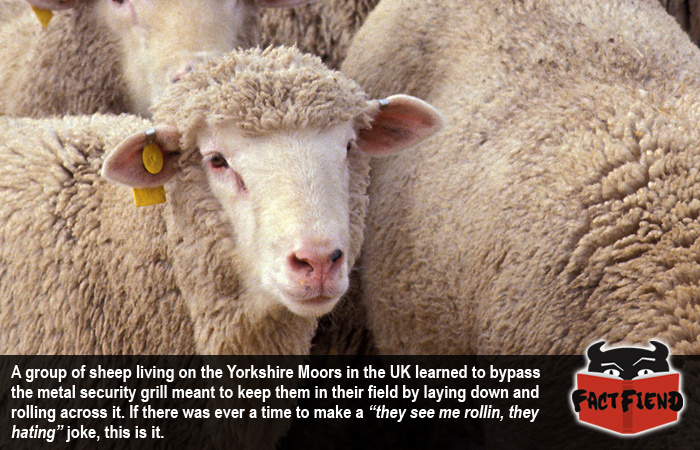 We’re guessing that like us, a lot of people reading this think sheep are dumb as shit. But did you know that the humble sheep is probably one of the smartest domestic animals we’re aware of, if only because a bunch of them once learned to escape their enclosure with the power of fuzziness.

Scientists have found that in tests of pure intelligence, your average sheep has brain power comparable to that of a rodent, monkey or human depending on the test. That last part isn’t a typo, there really is an intelligence test out there in which a sheep can give a fully grown human being a run for their money.

The test in question involved placing the sheep in front of several buckets of varying color, one of which had food below it. The test was repeated several times with the food always being hidden under the blue bucket. In the end it took the sheep around 7 attempts to learn that the food was always going to be hidden under the blue bucket, which just so happened to be the same amount of tries it took a human to learn the same thing.

If you’re currently feeling a little disheartened about this, when the rule was changed so that it was the shape of the bucket that mattered, not the color, it took the sheep 32 tries to get it right. Haha, suck on that, all sheep worldwide!

In yet another test it was found that sheep were capable of making its way through a complex maze in just a few minutes through a combination of memory and their herding instinct. After some training, the sheep were consistently able to do this in just over 30 seconds.

Sheep also have an uncanny ability to recognise the faces of other sheep, with some experiments showing that a single sheep can remember anywhere upwards of 50 faces for two years. That may pale in comparison to the amount of faces an individual a human can recognise, but sheep still have an leg up on us because they can recognise people too.

Moving back to the topic of rolling sheep, over in the UK a group of sheep in the Yorkshire Moors managed to escape their enclosure by rolling over the cattle grid specifically put in place to stop them. Fun fact, the cattle grid was installed after a previous sheep escape which annoyed a local resident so much he took a bunch of them hostage. The next time you’re sad, remember that at one point in history, a guy in England took a group of sheep hostage because they kept nibbling on his carrots.

What makes this story so great is that for a while, nobody could figure out how the sheep were escaping. Meaning that every time someone put them back in their field, they’d just roll over the cattle grid again and go right back to shitting in people’s front garden. It wasn’t until a local physically saw the sheep making their daring escape that someone realised, holy crap, they’d figured out how to bypass an obstacle literally designed to be impassable for sheep.

Then again, nothing is impossible for a suitably tenacious sheep.