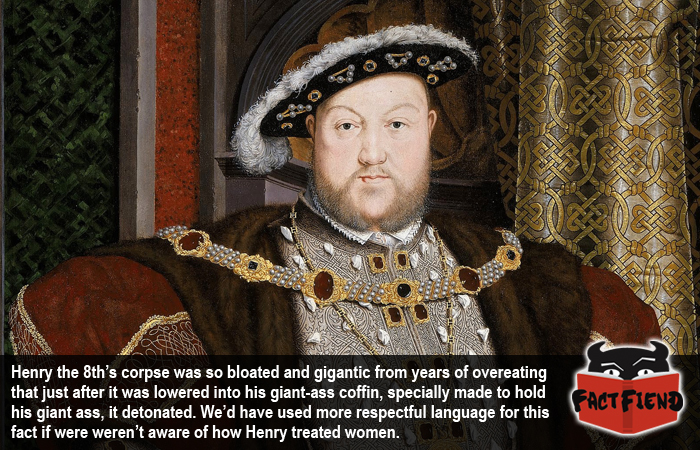 This article was recently turned into a video and features footage of me nearly choking to death on a biscuit.

If that’s not your bag, check out the original article below.

Henry the 8th is known mostly for two things, beheading a third of his wives and being a total fat-ass, well there’s another thing we want to add to that list today, exploding in his coffin.

If your knowledge of Henry the 8th is limited to just that one Simpsons episode where he’s played by Homer, allow us to fill you in. Henry the 8th was a king who ruled England throughout the first half of the 16th century, though he accomplished a lot throughout his reign as king, such as starting the English Reformation primarily to make it easier for himself to get a divorce, he’s mostly known for being that king who had 6 wives and was kind of a dick to most of them.

The other thing King Henry is known for is being a colossal fat-ass, a term we use in the absolute least offensive and most accurate way possible. Henry’s girth and accompanying appetite was legendary with the king routinely consuming an amazing 5000 calories every single day. This eventually caused King Henry’s weight to balloon to the point he physically had to be wheeled around his castle. At his peak Henry reportedly had a 54 inch waist and he weighed almost 400 pounds, just to highlight how insane this was, in his 20’s Henry had a 30 inch waist and a 39 inch chest, in other words, the guy was pretty freaking buff.

But sadly Henry let his good looks go when he discovered the sweet allure of ham based products, which combined with a horse riding accident in his mid 40’s left the king effectively bed-ridden. 10 years later, Henry died from a combination of his massive weight and a collection of various illnesses that had plagued him for years. 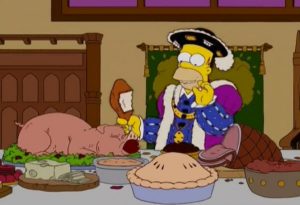 You’d think that after almost a decade of almost constant pain and horrifying weight related illnesses, Henry would have deserved a quiet, respectful death like the kind he gave all those wives he didn’t like. But alas no, after Henry died, presumably of a massive ham-induced heart attack, his body literally exploded after it was lowered into his specially made lead-lined coffin. According to some eye witnesses, the explosion actually caused bits of the king to leak onto the floor of the church in which the coffin was being stored. Luckily for everyone present, a group of stray dogs reportedly ate that shit right up so no one had to bother cleaning it.

We’re not making any of this up. This all actually happened and your history teachers just never told you.