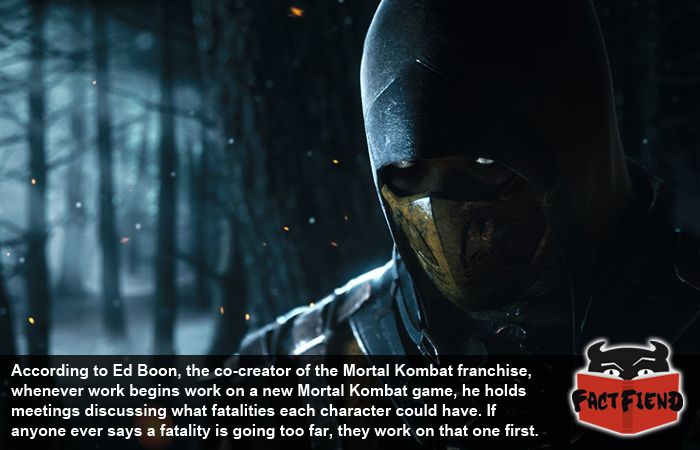 If you haven’t got the message yet, each Wednesday on Factfiend, we give our researcher a break and let him write a slightly shorter piece so that he can go clean things up on the side of the website you don’t see. Today’s fact is about how they try to push the envelope when they first begin making a new Mortal Kombat game, mainly because our author is super-excited for the the release of Moral Kombat X. Heh, what a nerd.

As noted in the image above, according to Mortal Kombat OG Ed Boon, one of the first things they do when work begins on a new Mortal Kombat game is sit down and discuss what new fatalities to give whatever characters are going to star in it. As you’d expect from the creator’s of a series known primarily for graphic hyper-violence and cool ninjas, these conversations often devolve into a bunch of people sat around a table coming up with the most disgusting, horrific thing they can think of happening to a human being. If during one of these conversations, someone stops to say that maybe they’re going to far by suggesting that one character should telekinetically rip their opponents stomach through their nose to finish them off, according to Boon, that’s the finisher they set to work on animating first. Because if at this point it’s not like people are ever going to accuse a Mortal Kombat game of going too far, is it?

If you’re interested in the history of how fatalities first came to be a staple of the Mortal Kombat games, why not check out our article on how Ed Boon never intended for anyone to discover them until way after the first game was released, only to be stunned when a 12 year old kid performed one, by accident on the first day the game was in arcades. Or if you’d rather read about the characters of Mortal Kombat, we have an article about how Scorpion can swear in exactly one Mortal Kombat game and another about how Liu Kang came to sport a mullet that may interest you.