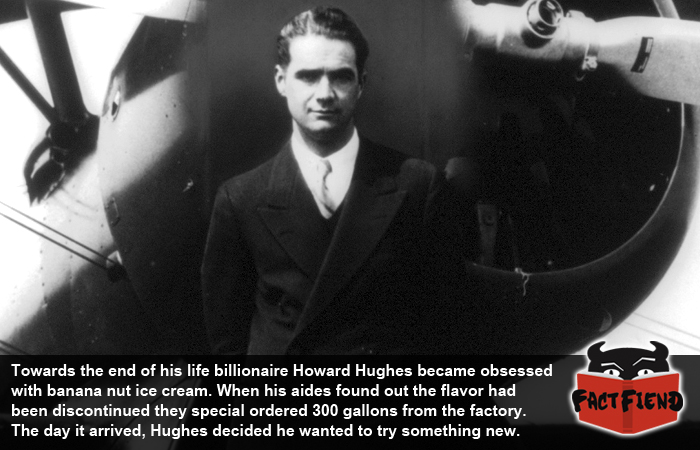 If the news has taught us anything, it’s that when you’re rich you can get away with pretty much anything. Thankfully, not all billionaires abuse their unfettered power and influence in ways that impact us regular folk. Take Howard Hughes for example, the man who bought the hotel he was staying in when they asked him to leave his room.

To put it s imply, Howard Hughes was a pretty fucking baller dude in his youth and his resume reads like a 3 people’s bucket lists combined, Voltron Style. Along with being a film tycoon, a business magnate and an inventor, making him literally one of the richest people to have ever lived, Hughes set several aeronautical records, sailed around the world and porked his way through almost every Hollywood starlet around at the time.

But it’s Hughes’ later life we’d like to focus on today, more specifically how batshit insane Hughes turned when he simply stopped giving a shit in his advanced age. An almost total recluse in his golden years, Hughes famously travelled to Las Vegas on Thanksgiving of 1966 in secret and set up shop in the Desert Inn hotel, after overstaying the shit out of his welcome, the hotel’s owner finally plucked up the courage to tell Hughes he’d have to leave to make room for more guests who’d been promised the rooms he’d been staying in, yes rooms. In response, Hughes bought the fucking hotel after one of his aides joking suggested he do so if he liked living their so much.

A few months later, Hughes complained about a large buzzing sign atop a rival hotel next door, rather than moving to any of the other rooms in the hotel he owned he bought the rival hotel and had the sign removed. A short while after that Hughes bought a Las Vegas TV and made it play movies 24 hours a day station for no other reason than he was sick of having nothing to watch at night. 4 years after arriving in Vegas, Hughes abruptly left in the dead of night without telling anyone and never returned, however, before he did he did fill the Desert Inn’s freezers with banana nut ice cream.

You see, during his stay at the Desert Inn, Hughes developed a particular fondness for Baskin-Robbins banana nut ice cream and his aides were only too happy to indulge his sweet tooth. When Hughes’ personal supply began to run low, his aides were terrified to find out that Baskin-Robbins had quietly discontinued the flavor. After a brief moment of panic the aides remembered that they were working for a man with unlimited funds and a severe lack of shits left to give so they decided to call Baskin-Robbins headquarters directly and see if they’d be willing to make special, one time delivery of the flavor. Baskin-Robbins rather surprisingly were only too keen to rush through an order of the the discontinued flavor, if the aides ordered 300 fucking gallons worth. Not wanting to upset Hughes, the aides agreed and the 300 hundred gallons were quickly whipped up and dispatched.

However, the day the ice cream arrived, Hughes explained to his aides that he no longer liked banana nut and that he’d instead developed a taste for plain ol’ vanilla. Upon hearing this new, his disheartened aides filled the Desert Inn with the ice cream where it was supposedly given away for free to every guest who stayed in the hotel for an entire year. There are even some who believe that if you looked hard enough, you’d probably still find some tucked away in the freezer somewhere.

If you want to read about more rich guy dickery, why not check out our article about Gordon Bennett Jr, a man who once bought a restaurant just because someone was sat in his favourite seat.