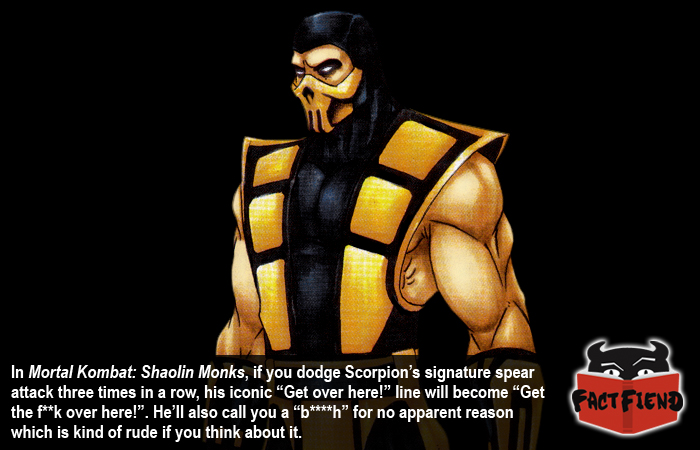 We’ve discussed Mortal Kombat here at FactFiend before, but we couldn’t leave the series alone without touching on perhaps one of the weirdest Easter eggs ever found in it, making Scorpion call you a bitch.

Over the years Mortal Kombat as a series has become synonymous with realistic hyper-violence, palette swapped ninjas and a dance track that has been on the playlist for every Laser Tag venue since the mid-90’s. Weirdly though, bad language is never something the games have been known for. Sure you can freeze an opponent and rip his somehow still screaming skeleton from his body or cut his head off and punt it across the room, but your character will never use bad language. Then again, it is rather difficult to talk when you have a sweet ninja mask covering your face, or a man’s clenched fist being thrust three feet into your scrotum. 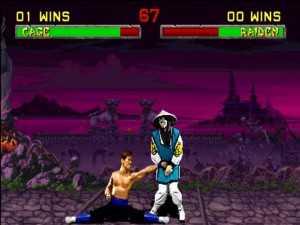 Speaking of which dick punching, depending on which version of Mortal Kombat you’re playing, the move shown above is referred to as either the “package check” or the “nutcracker” in the in-game command list. Now you may notice that both of these names are strictly PG-13, which, considering the rest of the content of the games, seems weird, right? Hell, even Shao Kahn himself will only say “you suck” if you lose to him and he’s an 8ft tall, genocidal maniac who kills people for fun, what did his mother stress good manners while teaching him how to skin a man alive?

In fact there’s only one real way to hear any character in the series swear and it involves avoiding one of the game’s most famous moves, Scorpion’s spear. In Mortal Kombat: Shaolin Monks, if you repeatedly avoid Scorpion’s spear move (after you’ve unlocked him of course) he will become increasingly frustrated with your refusal to take the hit like a man. If you continue to avoid this same attack, eventually, out of sheer rage, if the move connects Scorpion will say either “GET THE F**K OVER HERE!” or “COME ERE, BITCH”. Which along with making Scorpion sound hilariously like Jesse Pinkman, raises a few questions.

For those of you who don’t know, the iconic “get over here!” line was personally recorded by one of the games creators, Ed Boon. That same voice clip has been used for virtually every game Scorpion has ever appeared in, give or take a few re-recordings to clean it up over the years. Which means, for this single (kind of shitty) game, Boon decided to change the line for the first time in the character’s entire history. Which leaves us with a very sneaking suspicion that somewhere out there, there is another game in which you can make Scorpion swear. If there was ever a reason to bust out an old copy of Mortal Kombat III, this is it, you guys.