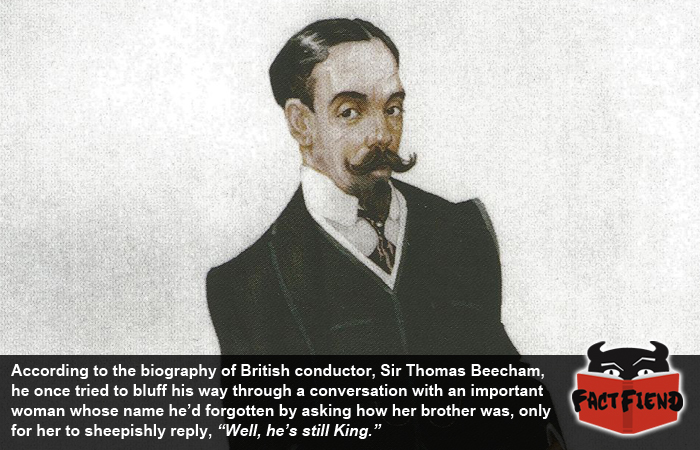 Awkward conversations are an unavoidable part of life that can legitimately haunt you for years depending on how many times you accidentally hit the other person in the neck with your elbow, so imagine how the British conductor Thomas Beecham felt when he apparently failed to recognise the sister of royalty and tried to play it off by asking how their family was.

You may notice that we’ve had to modify each mention of these story with words like “probably” and “apparently” and are probably wondering what gives? Well, although this particular anecdote about Beecham has been passed around for decades, even being told by the man himself over cocktails later in his life, how exactly the conversation Beecham had went, or whether it even happened at all, is contested by historians who we’re going to assume simply hate cool stories.

One of the things that makes the story most plausible is the fact that Beecham spent a huge amount of time rubbing elbows with some of high societies most influential and foppish individuals. Well regarded as one of the foremost conductors in the world at his peak, Beecham often had the distinct privilege of attending ultra-swanky parties where the rich and famous rubbed elbows and stood around awkwardly sipping champagne. As a result, it’s not only likely that Beecham met royalty, it’s pretty much  a guarantee. Likewise, considering how many people Beecham must have met on a daily basis, it’s equally as likely that he could forget the name of a member of the British royal family, we mean, it’s not like they put those people on money or anything.

As for what actually happened that day, the most oft-quoted version is the one cited in a biography of Beecham which details a hurried conversation that took place between Beecham and Princess Victoria, the sister of the current King of fucking England, Edward VII. According to this version of the story, Beecham recognised Victoria’s face but had difficulty placing where exactly he recognised it from, so, in an effort to not look like an idiot, he casually enquired about the woman’s family. When she lamented that her brother was unwell, Beecham jumped at the chance to ask what he did for a job, hoping that would somehow jog his memory, only to be made to look a fool when Victoria responded, “He’s still King.”

Other versions of this story exist, however, since this version was often told by Beecham himself, it’s the version we’d be willing to put money on. Just not a lot of it because there’s no proof it happened. That isn’t to say it didn’t, as we’ve already mentioned, Beecham was a pretty important guy and he almost certainly would have met Princess Victoria and it’s not like he had anything to gain by admitting that he once failed to recognise her at a party. However, record keeping a century ago wasn’t as good as it is these days, we’ll simply never know the truth.

If you’re still in the mood for awesome historical comebacks, why not check out our article on how the tallest soldier to fight in the Civil War responded to people making fun of his height. Or why not read about how King Agesilaus of Sparta slapped down a rival King who was bragging about how cool his city’s walls were. 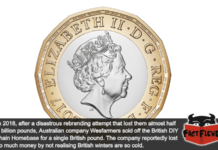