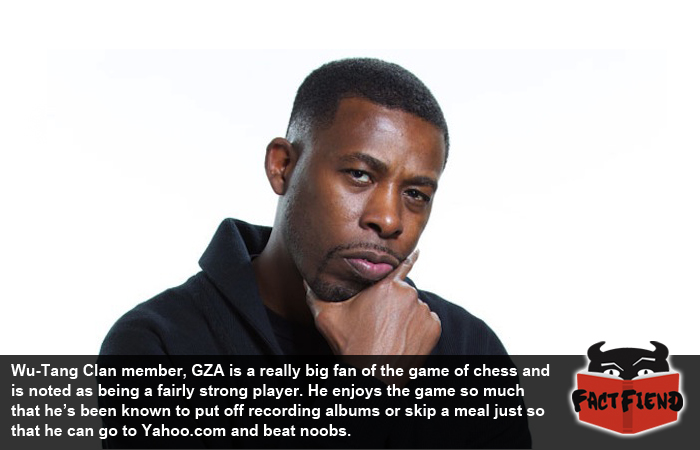 While chess and hip hop may not seem like a combination that makes much sense, the Wu-Tang Clan, true to their style of not giving one ounce of a shit what people think, have spent the last decade or so seamless intergrating the game into their raps and albums. In the process becoming incredibly strong players who could give actual grand masters a run for their money.

According to GZA (which is pronounced exactly how you think) members of the group often spend hours at a time drinking and playing chess in between bouts of watching kung-fu movies and smoking a shit-ton of drugs. GZA has admitted in the past that he enjoys chess so much that he’s put off recording albums just so that he can go smash noobs on Yahoo messenger and has said that he once stayed up for 12 hours straight playing chess with Masta Killah, only stopping so that he could power nap to fuel his chess cells with sleep and sandwiches cut into the shape of their band’s logo. Hell, GZA loves chess so fucking much half his clothes have a chessboard pattern on them and he once released an album that featured a stylised version of him rage-stabbing someone on a chessboard surrounded by Wu-tang apparel clad ninjas.  Which also came with a free chessboard.

GZA even recorded an entire album just so that he could fawn about how much he loved the game. But GZA isn’t the only member of the clan who loves chess, though he is noted as being their strongest player, RZA (whose name is pronounced exactly how you think too) is also a big fan of the game. So much so he’s a “champion of the Hip-Hop Chess Federation” which is something we’re absolutely not making up because, we could never lie about something that fucking cool.

For a while RZA even operated a site called, get this, WuChess dedicated to letting fans of their music play the game online against one another and sometimes him when he felt like it, just so that they could see why he and the other members of the group loved the game so much. As you’d expect for a website melding together two things less compatible than orange juice and toothpaste flavour Doritos, the site no longer exists. Which is a shame because according to the New York Times, the site let you use customised pieces that all looked like ninjas doing dragon kicks and tiger claw uppercuts.

When asked about why they loved the game, members of the clan are surprisingly philosophical, saying things like “it’s a game of war and of battle” and “I be liking chess”.

Oh and if you didn’t think the Wu-Tang Clan’s association with chess could be any stranger, according to RZA, he learned to play the game at age 11 from a girl who also took his virginity. How hip hop is that?

For more chess goodness that doesn’t directly involve members of the Wu-Tang clan, read about the chess master who won his first game at age 4 against a grown-ass man.