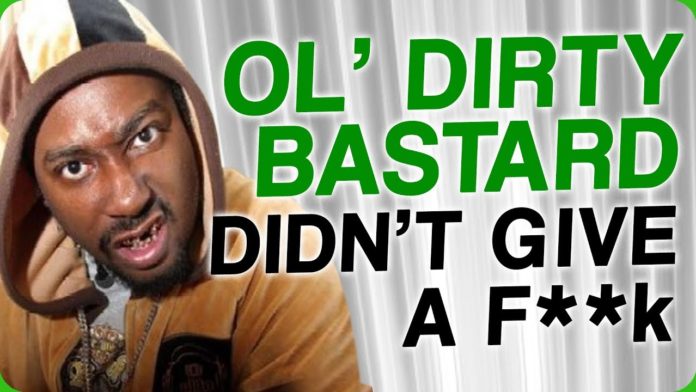 A few months ago we talked about how Marlon Brando once broke into his own fridge to take a big-ass bite out of a wheel of cheese. Since we found that inability to give a shit so hilarious, we decided to try and track down a man who gave even less of a crap, we think Ol’ Dirty Bastard of the Wu-Tang Clan might be that man.

For those of you who aren’t fans of the Wu-Tang Clan, the only thing you really need to know is that the Wu-Tang Clan ain’t nuthin’ to fuck with and that up until his death in 2004 Ol’ Dirty Bastard was arguably one of their most talented members. However, as Wikipedia helpfully points out in like the second paragraph of his life story, his success and talent was often overshadowed by the fact he had frequent, often awesome run ins with the law.

As the image at the top of this page notes, the BZA once leapt out of a random person’s window after being chased for several minutes by their dogs. What we couldn’t fit into image though is why ODB leapt into their garden in the first place when he’d originally left his house to buy some ice cream. The story goes that ODB was on his way to the store at 2AM after a heavy day of taking the kind of drugs that make you think it’s a good idea to to leave your house at 2AM to buy ice cream when he felt like a suspicious car was following him. To escape the car ODB leapt over a nearby fence and landed on top of three rottweilers, at which point he began sprinting around the garden while they nipped at his heels. When the owner of the dogs heard the commotion and opened their door to see what the hell was going on, ODB ran into their house and then leapt out of a second story window.

Other versions of the story have ODB sneaking through the owners doggy door and asking them to call the police, either way it ended with ODB in hospital with several broken bones after he leapt out of a fucking window. When the police asked ODB to explain why he’d basically broken into someone’s home, he told them that he thought he was being followed, at which point they looked at his drug report and rolled their eyes. A day later ODB discharged himself from the hospital and was (non-fatally) shot in the back by a rival rapper who’d been stalking him for several days 20 minutes after leaving the hospital, basically proving that he was absolutely right to be paranoid. Unperturbed by the fact he’d been fucking shot ODB once again left discharged himself from hospital after being patched up.

But that’s not the only time ODB up and disappeared without telling anyone. In 2000 ODB walked out of court mandated rehab because he didn’t feel like it and then promptly went on the run. Despite the fact the police were actively hunting him down, ODB was later spotted at a fucking Wu-Tang Clan concert promoting the release of the groups’s latest album. He was eventually arrested several hours later in a McDonalds car park signing autographs for fans. In other words, he was arrested when the police heard reports of a man matching his description, signing his name for a bunch of people wearing t-shirts with his face on it.

Another time the crowd at a Wu-Tang Clan concert started rioting, when other members of the clan asked if ODB had any ideas for calming them down, he responded by pulling out a pistol and emptying the clip into the ceiling and bolting for the door while his friends hauled as much ass as they could handle.

Another time, he hired a limo and had it drive him to the welfare office to pick up his welfare check and a bunch of food stamps, while MTV filmed the whole thing, just because he thought it’d be funny. At the time he did this, ODB had a 45,000 dollar advance from his record company burning a hole in his back pocket and was wearing clothes worth more than the GDP of one of those really shitty countries that lose to North Korea at the Olympics.

Then you have the time ODB accidentally ended up with a writing credit on the song Ghetto Superstar when he walked into the wrong studio and everyone just decided to just roll with it because Wu-Tang.

We honestly think if ODB was still alive today, he’d be selling empty boxes labelled “fucks” with his face on them while appearing in random music videos like a cooler, musical version of Nic Cage.