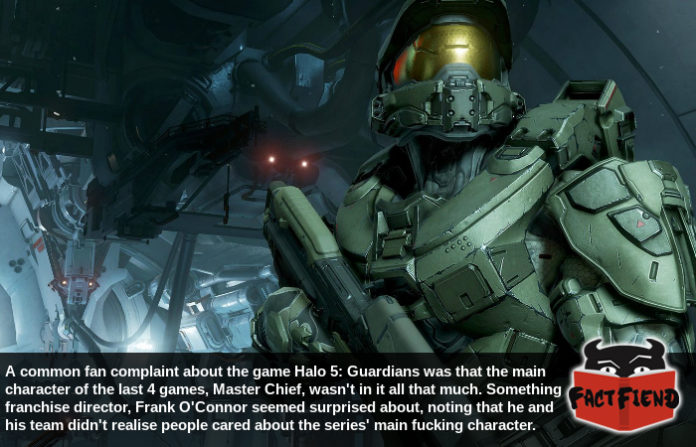 There are like 3 characters of note in the Halo series and two thirds of them spend most of the series inside the same suit of armor. So you’d think a company tasked with making a Halo sequel would realise that maybe, just maybe people give a shit about the characters the series has followed for over a decade. If that’s the case, you’re giving 343 Industries way too much credit.

If you’ve never played one of the Halo games, here’s pretty much everything you need to know about it. Most of the games in the series follow the adventures of a super-soldier with the biggest dick in the entire universe called Master Chief. Throughout the series Master Chief saves the galaxy from complete and utter annihilation like 3 times, singlehandedly, felling countless enemies with a variety of weapons, vehicles and his bare fucking hands. 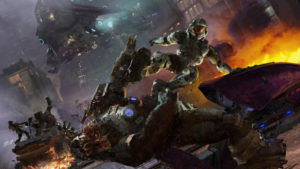 Largely considered the mascot of the Xbox and a consistent runner up in video game character popularity polls, Master Chief is rightfully considered to be an iconic and beloved icon of gaming. It probably also helps that pretty much every video game he’s ever appeared in has received near universal acclaim from critics and had a multiplayer element so good it basically set the precedent for how online first person shooters on a console should be.

In 2007 the original developer of the Halo franchise, Bungie, announced that they were going to be parting ways with Microsoft, who later handed off production of new Halo games to in-house studio, 343 industries. Which brings us to Halo 5.

Almost immediately fans of the series realised something was amiss when promotional material for the game began pushing a new character called Spartan Locke. Along with this new character being prominently displayed in all of the advertising, 343 also retroactively inserted him into a remastered version of Halo 2, because if there’s one thing longtime fans of a series love it’s a new character they have no reason to like or care about being shoved down their throat. 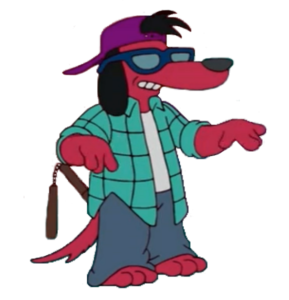 After rumors began to swirl that the game was going to be centred around this new character, a spokesperson from 343 issued a statement saying that no, Master Chief is still the main character. You know, even though he wasn’t in any of the advertising and they were trying really hard to get everyone to like a new character they created.

When the game was released, this turned out to be a blatant lie and Master Chief, while present in the story played second fiddle to Spartan Locke, only being playable in 3 of the game’s 15 missions. Remember, this character was the literal face of the previous 4 games and according to in-game canon, saved the world on his own. Speaking of which, because the game has to push Spartan Locke, he’s shown as being able to hold his own against Master Chief – a character who in the previous games effortlessly mowed down entire armies – in a fistfight.

A delightfully frustrating trope known as the Worf effect, which for those who aren’t familiar with it, is a lazy story telling device used to establish a character as being “badass” at the expense of an already well-known character by having the new character beat the old character’s ass. As you may have guessed it’s named for Worf from Star Trek: The Next Generation who has his asshole blown out so much as the series goes on, because him getting his ass kicked is the easiest visual shorthand for showing a new character is tough, that it makes him seem useless. 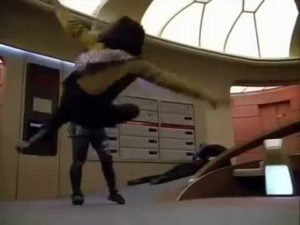 Likewise, Master Chief being rocked in a fist-fight when we, the player saw him punch giant aliens three times his size to death to save rocket launcher ammo in the previous games makes him seem less special.

Understandably fans were a little upset that the game barely featured the series’ best known character and that when he did appear it was in anti-climactic cutscenes where a character we’ve never seen before socks him in the jaw. Something that completely astounded 343 who released a statement saying they had no idea fans considered him to be a major character in the Halo universe. In addition, franchise director Frank O’Connor explained that he and his team were shocked to see that fans wanted to see either a continuation of or a conclusion to Master Chief’s story.

Amazingly, in the same interview, O’Connor noted that his team was aware that fans had been following Master Chief’s story for 15 fucking years. Meaning somehow nobody on his team figured out that maybe him being in every mainline game had something to do with their success.