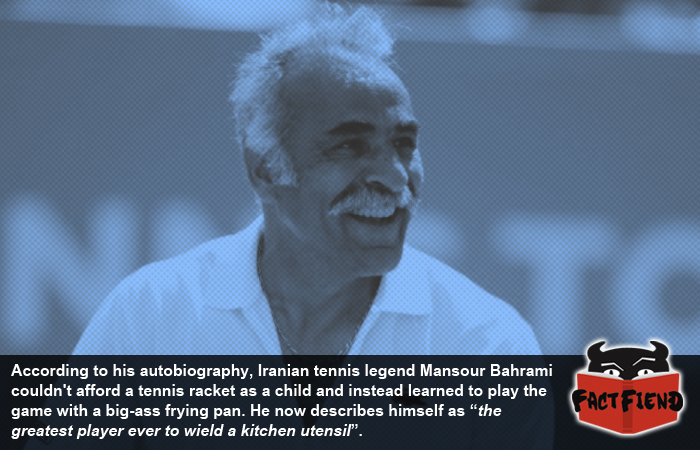 There’s a famous video online of the former best tennis player in the entire world, Andy Roddick, hammering the shit out of someone while using a frying pan instead of a racket as part of an experiment to see how much better than average people professional athletes really are. According to the man behind that challenge, lumbering Roddick with a frying pan was the best way he could think of to even the odds in his favour, which make it all the more impressive that there’s a tennis player out there who claims to have learned to play using one. Mansour Bahrami.

In the world of tennis the name Mansour Bahrami tends to divide opinion, mostly due to the moustachioed Iranian’s habit of showing off when he played at a pro level. On one hand, there are some who think Bahrami squandered his obvious talent and wasted chances to progress by dicking around so much, on the other there are people who think this was fucking hilarious. You see, Bahrami is incredibly adept at pulling off trick shots and during games with other players he’d often do things like this …

Which while awesome, is difficult to pull of consistently and led to Bahrami losing matches he could have easily won if he’d played while not having any fun. As a testament to this fact, when Bahrami played doubles and thus couldn’t dick around as much because he’d let down his partner, he made it all the way to the finals of the French open.

Bahrami usually attributes his unique, big-dick, style of play to the time he spent in Iran as a child playing tennis with a frying pan and a broom handle. Because he couldn’t physically afford a tennis racket, Bahrami spent years learning to play with whatever he had lying around. By the time Bahrami managed to get his hands on a proper racket at age 13, he found that years of playing with that piece of shit frying pan had made him fucking amazing at tennis.

However, Bahrami’s dreams of tennis stardom were cut short when in the 70’s, Ayatollah Khomeini suddenly decided that tennis was a decadent western sport and that nobody in his country was allowed to play it. This decision effectively robbed Bahrami of his prime, forcing a player who was instrumental to Iran’s team making it to the Davis Cup at just age 16, to sit around playing boardgames staring longingly at abandoned tennis courts. When Bahrami won a backgammon tournament in the early 80’s, he took the winnings and flew to France, where he promptly lost all of his money in a casino.

With no money, Bahrami was forced to live on the streets of France while his best tennis playing years slowly dwindled away, only managing to play a couple of tennis tournaments here and there, many of which he lost because he was half starved and spent most nights sleeping under a bridge with only his moustache to protect him from the elements.

Bahrami was 30 years old before he began to appear regularly at tournaments, at which point people began to realise, holy shit, this guy was good. Bahrami’s amazing ability to do things like smash the ball over the net and make it bounce back, play while sitting down and serve backwards made him a crowd favourite. So much so, tournament organisers began paying him just to show up on the understanding that he’d continue to pull of mind-blowing shit in the middle of his matches. 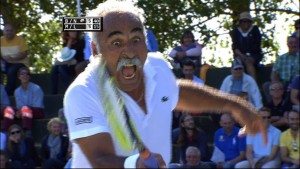 Bahrami’s exploits didn’t just impress crowds either, his tennis playing peers were similarly amazed by his seeming affinity for the sport with him being variously described as “a genius” and “one of the most naturally gifted players to ever pick up a tennis racquet“.If you’re curious about where that last quote came from, we took it directly from Bahrami’s profile on the official Association of Tennis Professionals website. There are some who genuinely believe that if he’d been allowed to pursue his passion when he was still a young man, that he could have been one of the singular greatest players in history.

With his best years behind him though, Bahrami instead focussed his attention on continuing to be a ridiculous cool guy and began entering seniors tournaments to show off his trick shots. Bahrami continues to play to this day, travelling the world beating players decades his junior by playing with the racket held behind his back just to show them that he’s still got it and then some.

If you find yourself feeling sad for Bahrami, the man himself would kindly request that you cut that shit out and he’s been quoted as saying, “Yes, I believe I could have been Wimbledon champion. But I am happy. I play 45 weeks a year and travel more than any other player. Anyway, it is good for the soul to go hungry at some time in your life.”

If you’re still in the mood to read about sport, why not check out our article on the ancient Japanese sport of shooting at dogs with large padded arrows.