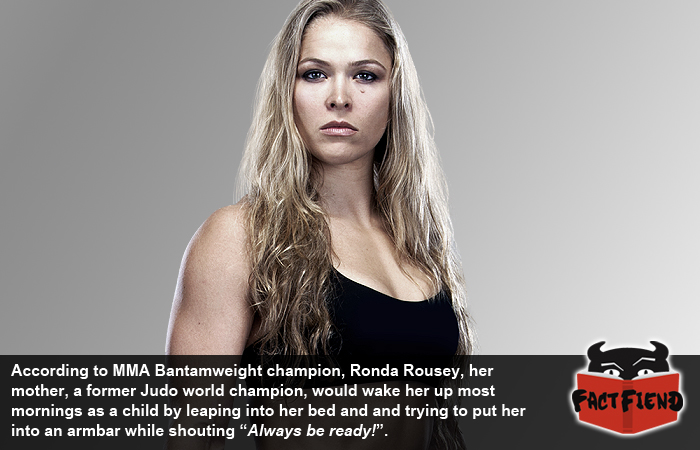 According to pretty much fucking everyone, Ronda Rousey is, at the time of writing this article, the most dominant MMA fighter in the entire world. In particular Rousey is noted for her scapula-shattering armbar, which she’s used to to crush the dreams and clavicles of 9 of her last 12 opponents. If you’re wondering how Rousey learned to so precisely cause a pin-point fracture in a human collarbone, that may have something to do with the fact her mother used to wake her up using a move that caused one almost every single morning.

Notice how we didn’t qualify that statement by saying that Rousey is one of the best “female” MMA fighters, that’s because according to the official UFC rankings, Rousey is the 4th best fighter they have right now, meaning she could likely kick the shit out of 99.9% of the people reading this right now, regardless of gender, size or how much they post on those parts of Reddit where the words “nice guy” aren’t used ironically. Which makes it sort of, really god-damn depressing that one of the first options to pop up on Google when searching for her name is, “Ronda Rousey hot“.

Rousey is particularly famous for ending almost every fight she’s ever had in the first round by trying to tear her opponents arm out of its socket and beat them with it using what’s technically known as an “armbar” but better known by people Rousey has used it on as “the reason I now have to wipe my ass with a sponge stuck to a selfie stick“. Rousey is so adept at properly applying an armbar that she’s openly bragged in the past that she could probably use it to win every fight if she felt like it, which we’d say was a little presumptuous if Rousey hadn’t won 80% of the fights she’s ever had with a that one move and won the other 20% by punching her opponents until they nearly died.

Which isn’t surprising when you realise that Rousey literally spent her entire childhood learning how to avoid and apply this submission hold by her mother, Dr. AnnMaria De Mars who just so happens to be a world champion judo expert with decades of experience and training. According to Rousey, her mother would surprise her most morning by leaping through the air, onto her bed and attempting to put her in an armbar, which Rousey would then have either escape from or counter with an armbar of her own. Unsurprisingly after years of having a someone with a sixth degree black belt in flipping people through the air and snapping limbs wake her up every morning with a move out of Tekken 3, Rousey became pretty good at both avoiding and using this move herself.

Today, Rousey is so good at using the move, that she has been able to use it to end several of her biggest fights in seconds. All thanks to the dozen or so years she spent sparring with the first American to win a judo world championship as a child. Again, we’re not qualifying that by saying Dr. De Mars was the first American woman to win a championship, because fuck that noise, Dr. De Mars was the first American, period, to ever to be crowned a world champion of judo, which she did in between raising children and earning a doctorate in Educational Psychology. Holy shit, it’s no wonder Ronda Rousey kicks so much fucking ass, she literally had an amazing teacher for a mother.

We’re also guessing being woken up every morning by a judo hold helped too.

If you’re still in the mood to read about people who are unstoppable in the ring, why not read all about that time God wrestled in the WWE.