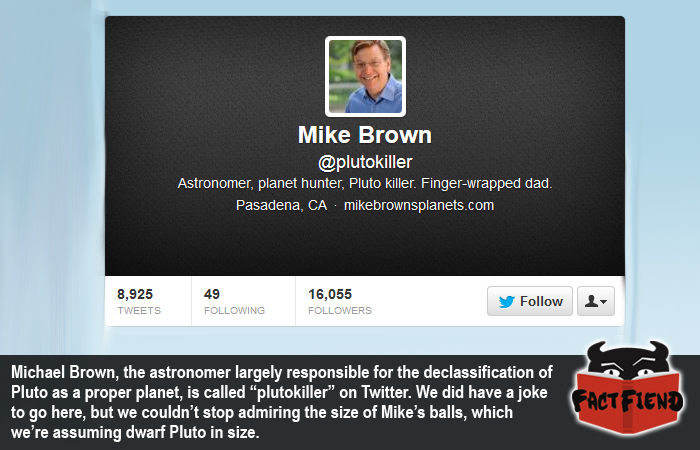 Michael E. Brown is probably so smart he could program his TV to call us dicks with nothing but a Nokia 3210 if we tried to make fun of him, so we’re going to just say we think he’s awesome and that we love his nickname. Plutokiller.

If you’re wondering how Brown got a nickname that badass without killing a Sith Lord with a tire iron, he’s the guy behind the declassification of Pluto as a planet.  Yes, he’s that guy.

If you’re not familiar with why Pluto is no longer considered a planet, it’s because Michael discovered a dwarf planet called Eris in early 2005. To the surprise of everyone involved with the discovery, except for Michael who we assume never stopped wearing sunglasses and walking away from explosions at the time, Eris was bigger than the, then, planet Pluto.

This left the research team who discovered Eris in a compromising situation, they couldn’t classify Eris as a dwarf planet when it was bigger than freaking Pluto but they couldn’t continue referring to Pluto as a planet when it was smaller than a dwarf planet. To decide the matter once and for all, the International Astronomical Union gathered together a bunch of astronomers in 2006 to officially decide on the definition of a planet once and for all.

That meeting eventually resulted in Pluto being downgraded to the solar system’s chump and resulted in it being officially recognised as a dwarf planet like its long lost bigger brother, Eris. A decision that was fully supported by Brown.

Fun fact, prior to it officially being named, Eris, Brown and his colleagues called the new dwarf planet they discovered, Xena when they were just chilling in their office. The name was leaked to the press and for a short while the planet was unofficially known as Xena, which Brown reportedly enjoyed because he though the name Xena was way more kick-ass than Eris. We’re not going to argue because we completely agree with him.

After effectively destroying an entire planet Brown went all Darth Vader on the scientific community and embraced his new found infamy as the guy who’d killed Pluto by adopting the moniker “Plutokiller” on Twitter. He also wrote a book titled “How I Killed Pluto and Why It Had It Coming” because of course he did.

If you’re a fan of space and basketball, why not read all about how Chuck Jones, fucking hated Space Jam.