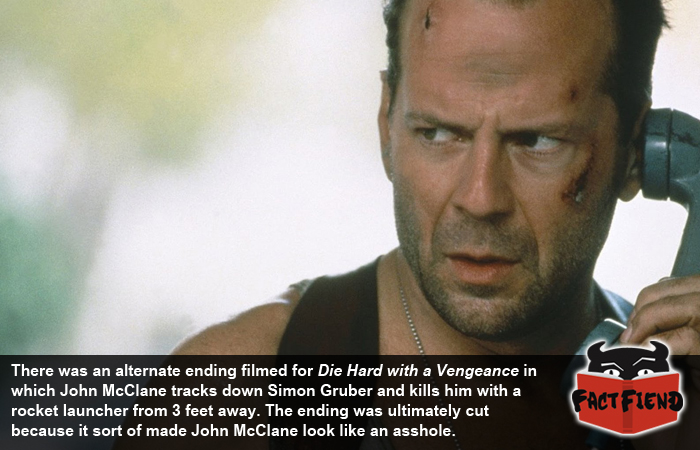 Fans of the Die Hard, often stylised as “DIE HARD!” because true fans know the the title of the film should always be screamed, mostly agree that the franchise jumped the shark when John McClane killed a helicopter with a car. Apparently though we were this close to seeing something almost as stupid in the third movie of the franchise, we’re talking of course about the deleted scene where John McClane kills Simon Gruber with a fucking rocket launcher.

The scene, which was actually filmed and was originally intended to be the ending to Die Hard With a Vengeance, shows our hero tracking down Alan Rickman’s brother to a shitty little village somewhere in Eastern Europe that looks suspiciously like a cheap movie studio set. Over the course of a few minutes, McClane grills Gruber at gun point and its revealed that not only did Gruber get away with stealing billions of dollars worth of gold, but that he also betrayed all of his former special forces comrades and left them for dead. An irrate McClane also reveals that he was fired from the NYPD and lost his pension, which sort of brings up the question of how he justified buying a ticket to the middle of a Eastern Europe on a hunch that Gruber would be there, but there’s no time to think about that because, boom, fucking rocket launcher.

After ordering Gruber to clear out the bar, McClane then surprises him by pulling out a “Chinese rocket launcher” that according to IMFDB was custom made for the movie. McClane then informs Gruber that he’s removed all markings from the device, so even he doesn’t know which end the rocket will fire from and explains that they’re going to play a game.

After placing the rocket launcher in the middle of the table, McClane then begins asking Gruber a series of riddles to fuck with him while simultaneously playing a game of Russian roulette, with a rocket launcher. The scene ends when Gruber pulls the trigger and is immediately killed by the rocket lodging itself in his chest cavity, at which point McClane reveals he was wearing a bulletproof vest all along, which we don’t think are rocket proof but whatever, it’s a Die Hard movie, showing that even if Gruber would have picked right, he’d have survived long enough to shoot him in his stupid face. Which begs the question, why give Gruber any chance to survive at all if your backup plan was to just shoot him anyway?

This same question bugged the filmmakers who felt that the scene, which essentially shows McClane mentally torturing someone at gun point, wasn’t really in keeping with his character who up to that point, had only really killed in self-defence. We mean, we know McClane is a hero, but it still would have been kind of hard to root for him in the earlier Die Hard movies knowing that in his head, forcing someone to commit suicide with a rocket launcher  is a totally normal thing to do if they really pissed you off.

The filmmakers also felt that the scene was a little flat and not filled with enough action, which is why it was ultimately scrapped and replaced with a scene where McClane shoots down Gruber’s helicopter and spouts of one-liners while he horribly burns to death with his girlfriend. Holy shit, John McClane is a fucking monster when you really think about it, but hey who cares because … 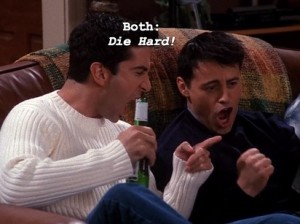 To see a side of R.J. MacReady, the hero of The Thing, we as an audience never got to see, why not check out this article.

That time they launched Arnold Schwarzenegger’s name into space, for a movie

That time they launched Arnold Schwarzenegger’s name into space, for a...