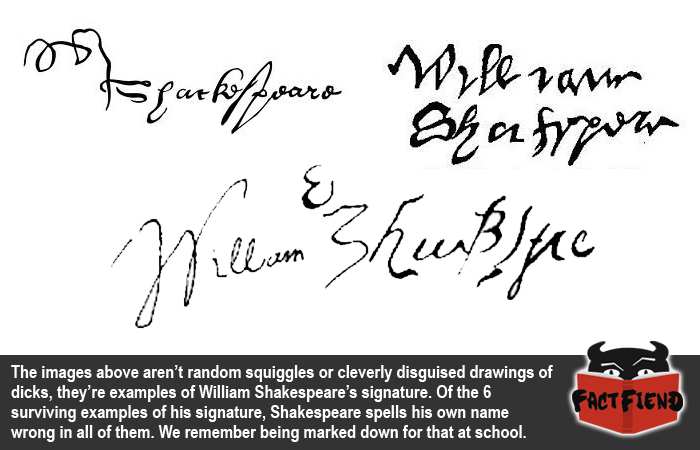 To be absolutely crystal clear, we’re not engaging in even the remotest bit of hyperbole here. In all of the authentic surviving examples of Shakespeare’s signature, the spelling of his last name differs from our own modern spelling of it every. Single. Time. For everyone currently thinking “well maybe he spelled it differently to us” we should point out that those 6 signatures include 5 different spellings. So the best case scenario here is that Shakespeare could spell his own name correctly about 20% of the time, we don’t even think the Daily Mail has an accuracy rate that low and we’re talking about the guy who coined the terms “all that glitters is not gold” and “What the dickens?”

The impact Shakespeare made on the English language is massive, you only need to take a look at the list of words and phrases directly invented by him to realise that. Not to mention that Hollywood has been ripping off his plays for decades, everything from The Lion King (based on Hamlet) to 10 Things I Hate About You (based on Taming of the Shrew) owe their existence to a Shakespeare play.

Now we’re not saying that these plays aren’t awesome, or that Shakespeare didn’t make a huge contribution to the English language and culture in general, we’re just trying to point out that a guy romanticised by the media as the finest writer the world has ever known, couldn’t spell.

But hey, it’s not his fault because Shakespeare lived in a time when English spelling wasn’t yet standardised, so he can hardly be blamed for not spelling words like “life” correctly (he actually spells that word wrong in one manuscript) because there was no such thing as correct spelling back then. However, there’s not really an explanation for why a guy known as one of the most influential writers of his day his own freaking name, we mean, surely he had to sign legal documents at some point or something, right?. Apparently not because literally every surviving example we have of his signature looks like he wrote it with his left hand with his thumb planted 4 inches deep in his asshole. Weird, huh?