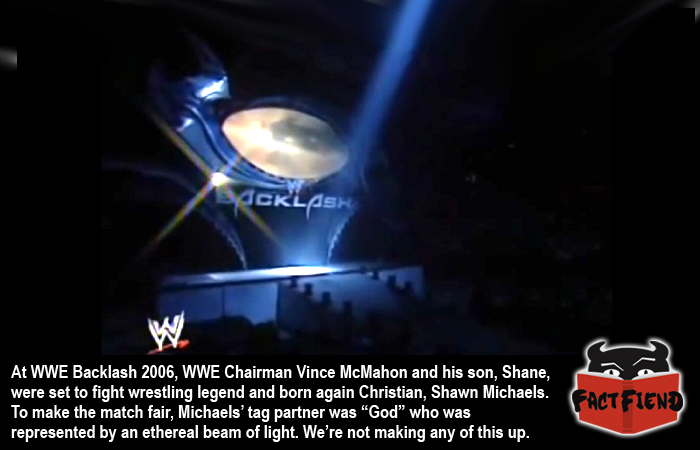 Even though we’re pretty sure God spends the majority of his time sitting on a throne of gold half-heartedly chucking lightning bolts into a waste paper basket, the World Wrestling Entertainment company thinks the man upstairs is a wrestler in his spare time. Which is the only logical explanation for why there was once a wrestling match in which “God” was literally listed as one of the rostered wrestlers.

Just so we’re clear, this wasn’t a stupid ratings grab by a tiny independent company or something like that, it was an actual, scheduled wrestling match hosted by the WWE in 2006 for their Backlash event and it starred its own freaking CEO, Vince McMahon and his son.

Now Vince and his son, Shane were set to face wrestling OG and face-kick aficionado Shawn Michaels in a handicap tag match, which far from being a wrestling match in which people with physical disabilities beat the shit out of someone, is a wrestling match in which 2 fighters take on 1. In order to even out the odds, McMahon insisted that Michaels’ partner would be none other than the Holy Roller himself, God.

We should point out that prior to this match, Shawn Michaels had just become a born again Christian which Vince was itching to work into a wrestling story somehow. Not that we’re judging, we’re just here to talk about how freaking absurd this who ordeal was, because even though we watched the entire thing about 8 times while writing this entry, we’re still kind of hoping we have some rare eye disorder that only allows us to see balls-out insanity in place of scripted events. Purely because after writing this we’re going to the zoo to see if all of the lions there have suddenly learned to fly.

If Vince had just said that Michaels’ only partner in that match would be his faith in God, that in itself wouldn’t have been that bad, in fact that would have probably been a pretty awesome way to show how faith can give someone inner strength when things look tough. However, since the world of professional wrestling isn’t known for being subtle, when Vince McMahon announced that Shawn Michaels’ partner was going to be God, this happened.

If you can’t quite tell what’s going on in that GIF, that’s “God” (represented by an heavenly beam of light) making his way to the ring, flanked by a chorus of angels. If that wasn’t ridiculous enough, Vince McMahon spends almost the entire thing looking like someone was slowly trying to push a pine-cone up his asshole, which is doubly hilarious when you realise he’s the guy who arranged for this to happen. 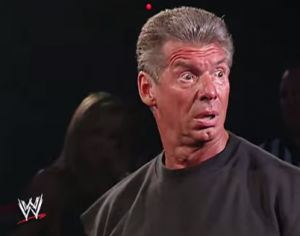 But we’re not done yet, after staring at the beam of a light for a few seconds, Vince abruptly tells it to stop, which it does because even the Alpha and the Omega knows not to break character in the middle of a match. Vince then chastises the heavenly creator for his lack of style and then, out of nowhere, starts just breaking it the fuck down while “God” is forced to groove along. Just to reiterate this all really happened and millions of people paid to watch it.

After the God enters the ring, Vince then motions to a bemused referee to “check the wrestler for weapons”, before dancing around some more. At this point we’re more impressed that Vince didn’t burst into flames for being that much of an arrogant dick, either from God getting pissed or the friction of his ego scraping against the sides of the stadium. Then again, even if that happened, we’re almost positive that Vince could beat fire in a wrestling match.

We were going to end this piece with a joke about wrestling being fake, but honestly, after seeing these GIFs, we don’t think we’ve ever wanted anything to ever be this real before. If only because we’re really curious about what God’s finishing move would be.