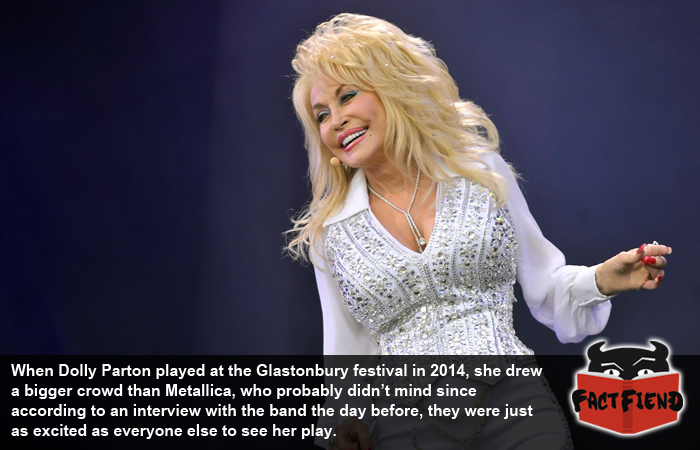 There are a lot of words and one or two somewhat vulgar hand gestures you could use to describe Dolly Parton and although the self-described backwoods Barbie has released songs in a number of genres, metal isn’t one of them. Which hasn’t stopped her from absolutely rocking the shit out of capacity crowds anyway.

For example, when Parton headlined the Glastonbury festival in 2014, the crowd she drew was noted as being one of the biggest the festival had ever seen, with over 100,000 people stood ankle deep in lukewarm sludge watching the pint sized pop-star play the shit out of a fiddle on the day she performed.

While the size of the crowd that gathered to watch Parton perform was pretty god-damn mind-blowing, the part that really surprised critics is that the, then 68-year-old country star not only managed to draw a bigger crowd than fucking Metallica, but that she put on a better show and managed to get the crowd more hyped than they did. If you’re not fully grasping how utterly insane this is, think about it this way, an elderly woman went on stage in front of 100,000 drunken teenagers, sang a few songs from the 70’s and then played a rhinestone covered saxophone and they fucking loved it.

Hilariously, apparently even Metallica themselves were pretty stoked to see Parton play, revealing in an interview that the whole band were planning on watching her perform, even going as far to say “We all bow to the altar of Dolly” when asked about their thoughts on the singer and how much ass she kicked. Which isn’t surprising considering Dolly is not only a more prolific writer than that one guy we all have on Facebook who never shuts the fuck up about the novel he’s writing, but can also play more instruments than a reasonably sized orchestra.

So if you need something to pick you up today, just think that Dolly Parton, at 68-years-old, could still rock hard enough to put on a better show than Metallica by playing the Benny Hill theme on a pimpin’, rhinestone covered saxophone.

If you want to read about something else that’s pretty metal, why not read our article about that one time Peter Weller wore headphones under the Robocop costume.