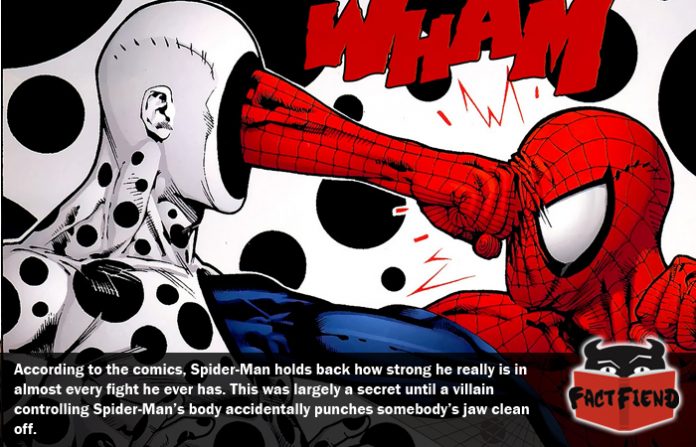 Spider-Man’s superpowers are fairly self explanatory, he’s a human with the equivalent abilities of a sufficiently big-ass spider. While many people recognise that this translates into Spider-Man being able to stick to walls (or the Incredible Hulk’s bicep). Few realise the wall-crawler can also punch people’s faces off if he’s sufficiently pissed off.

This is because, according to the comics, throughout his entire career Spider-Man has held back in virtually every physical confrontation he has ever taken part in because he mostly fights regular humans. This means that almost nobody actually has any idea how strong he really is. This came to a head in one comic arc when Dr Octopus was controlling Spider-Man’s body and punched the villain Scorpion’s jaw right the fuck off. Making the flabby scientist realise that Spider-Man could have killed him and indeed any villain he’d ever fought in his entire career in literally one punch, but chose not to. 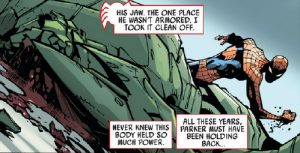 The exact limits of Spidey’s strength are hazy, mostly because Spider-Man himself doesn’t seem to know what they are, frequently surprising himself by doing things like catching a 30 ton armoured truck that’s being thrown towards his face at mach 3 like it isn’t even shit while talking on the phone.

Spider-Man has also been shown to be capable of knocking aside human opponents with little more than a light tap or ego-shattering slap and can no sell what would normally be kidney crushing body blows from a heavyweight boxer.

This in of itself is impressive, but then you have to factor in the fact that Spider-Man is considered the most lethal hand-to-hand combatant in the entire Marvel Universe. To be clear, Spider-Man isn’t considered a good fighter, master martial artists like Captain America, Wolverine and Iron Fist all note that Spider-Man’s spider sense (which lets him avoid virtually all danger) combined with his superior reflexes and ability to punch a truck to death, mean he’s literally unbeatable in a fist fight. So much so, people have worked out he could probably slap the shit out of Batman.

Which makes it all the more amazing that he regularly gets his shit pushed in by low-level street thugs because he refuses to style on his opponents as hard as his abilities would allow because that’s not what Uncle Ben would want.