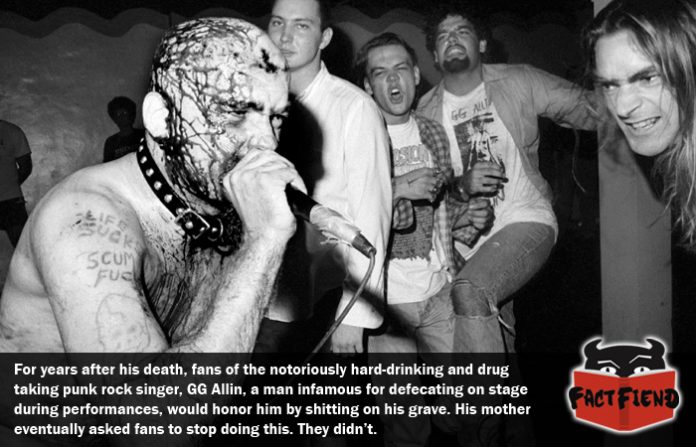 Few people in history have ever lived (or died) as hard as the little known punk rock singer GG Allin, a man so infamous for wanton acts of debauchery and violence during his life, fans would regularly shit all over his grave as a way of honoring his memory.

We feel that it is important that nothing we just said is hyperbole, Allin’s fans would regularly shit, piss and pour beer all over his tombstone as a way of preserving the singer’s legacy. If you’re currently wondering why in the dick-tits anyone would think Allin would have wanted his fans to shit on his final resting place or have no idea who the fuck he is, allow us to sum him up with a single image. 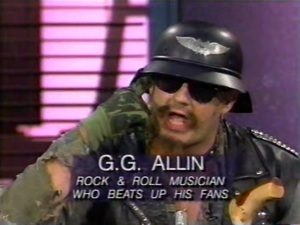 In short, Allin was a punk rock singer who existed on the most extreme edge of the genre’s spectrum. Little known outside of his incredibly specific niche and hated by critics forced to listen to and review his songs, Allin claimed his main goal was to “bring danger back in to rock ‘n’ roll”. Something he accomplished by being as batshit insane as possible at all times.

As noted in the image above, Allin would regularly liven up his concerts by punching random fans as hard as he could right in the face. To be fair to Allin he took as good as he gave and fans were expected, if not encouraged to punch him back. In the event a fight didn’t break out, Allin would get the party started by fishhooking himself until he vomited blood and rolling around in broken glass. A move that seems doubly insane when you consider Allin’s other favourite party trick was to violently shit himself and either hurl handfuls of it into the crowd or, and we’re absolutely not making this up, eat it.

Allin’s antics eventually saw him becoming more famous than the numerous bands he fronted with people coming to his shows purely to see what in the hell he was going to do next. Allin was only too happy to oblige, with almost every show he ever played ending with Allin being dragged screaming from the venue by the police, naked, covered in his own shit and blood with various injuries to his anatomy.

Allin famously threatened on multiple occasions to commit suicide on stage on Halloween, but never followed up. Not because he was scared, but because he was already dead from a heroin overdose.

Now you’d think being dead would have stopped Allin being a crazy motherfucker, but amazingly, despite the handicap of being dead he still managed to party harder than most people will their entire life. Allin had made it clear shortly before his death that he wanted his funeral to be as rowdy as one of his shows and to that end his corpse was dressed in a leather jacket and a jockstrap with a bottle of Jim Bean. The mortician was also told not to wash his corpse, as per the wishes stated in his will which were released as a song aptly called “When I Die“, so it was buried still covered in shit and blood from several weeks earlier. To top things off, friends of the Allin celebrated by pouring whiskey down his throat and doing drugs with him before burying him with a cassette player playing his own album at max volume. Yes, Allin got more fucked up at his own funeral than most people do at their 21st birthday.

Ever since then fans of Allin have continued the party by making pilgrimages to his grave to drink, do drugs and shit all over it. As you can imagine, while Allin himself would have probably loved this, the families of other people buried in the same graveyard aren’t happy about it. This culminated in Allin’s own mother making a heartfelt plea for fans to stop, well everything they were doing, a plea they ignored. This prompted the priest in charge of the cemetery Allin was buried in to take matters into his own hands by simply remove Allin’s headstone so fans couldn’t find it.

Then again, all fans now have to do to find it take a dump on the only grave in the cemetery without a headstone and they can be like 99% sure it belongs to Allin. But hey, hats off to the priest for trying to stop rock and roll.