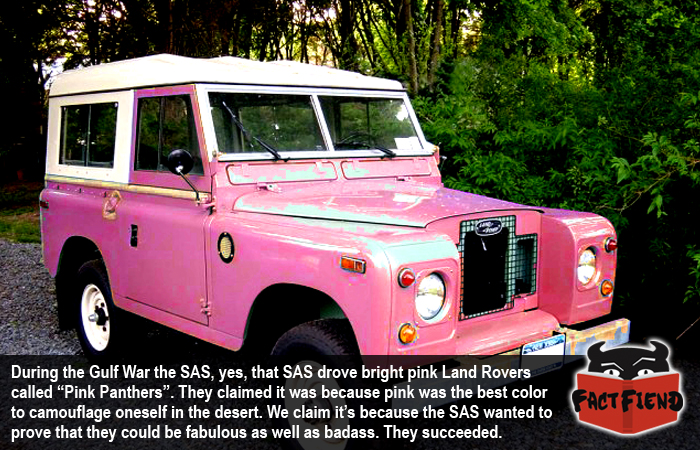 The SAS are so badass searching for them on Google is the leading cause of broken fingers and “accidentally causing a room to explode by being too awesome” is what most ex-members list as the most annoying part of being associated with the group. So it’s with great relish we’d like to inform you that during the Gulf War they used to drive pink cars.

The Land Rover is one of the most hardy and durable machines a soldier could hope to be sat in when people decide to see how many bullets they could lodge into their torso. They’re used extensively by a number of armed forces and can be altered in many ways to better suit the role required, for example you can remove the roof for when you need to really look cool while shooting at people along with other, less useful application we won’t bother mentioning here.

During the Gulf War, the SAS, one of the most hardened and elite military units on Earth were asked to go into the desert and punch everyone less cool than them with a bullet. To help them they were given 72 green Land Rovers, the SAS were thankful but weren’t happy about driving around in green vehicles that may as well have had “shoot here” written on them. So they painted them pink. And when we say “pink” we mean they literally painted every piece of the metal work a stabulous shade of shocking pink.

Far from being a stylistic choice, this was done because pink is an amazing color at camouflaging something in the desert. The SAS found this out when they happened upon a plane that had been shot down during WW2 and noticed that the metal had been worn pink after years of exposure to the sand. They also noticed that unless you were really close the plane was like a giant metal pink ghost in that from a distance, it was virtually invisible. They also recalled a shade of pink used to paint battleships to make the harder to see at night called Mountbatten pink.

Since being formless entities shooting people from behind a veil of sand was something the SAS were really into they painted their Land Rovers the same shade of sultry pink and nicknamed them “pink panthers”.

Sure it was a tactical decision and sure it made all sorts of sense given the situation, but it doesn’t change the fact that at one point in history the SAS drove around in pink cars.