Depending on how much of an asshole you are,  you either know Fall Out Boy as that band who sung Sugar We’re Going Down or that band that used to be good before they sold out. Whether you love them or hate them, there’s no denying that the band has found and exploited the shit out of a niche, but we’re not here to talk about that, we’re here to talk about their stupid name.

As noted in the image macro I Photoshopped in like 30 seconds at the top of this page (fun fact, Adobe hates the word “Photoshopped” and act like big cry baby assholes when you use it) Fall Out Boy initially decided on the name well, Fall Out Boy as a joke. Specifically as an obscure reference to a Simpsons character of the same name. 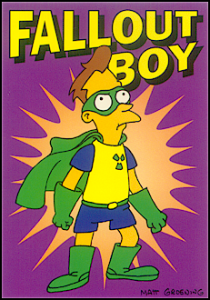 FOB lead singer Patrick Stump is a huge fan of the series and when the band were coming up with a short-list of names to call themselves, he added the name to the list as a joke while his band-mates tried to come up with names that either referenced Tom Waits or included words you needed a dictionary to find the meaning of, you know, emo stuff.

When the band ran the list of prospective names past their friends, like Stump they found the name Fallout Boy hilarious and picked that one. As a result, the band played their first gig under it, stylising the name as Fall Out Boy to avoid copyright infringement on the valuable Fallout Boy property Fox is probably going to turn into a franchise after they shit out another 3 Fantastic Four movies.

Immediately after their first gig, bassist Pete Wentz began brainstorming new ideas for a better band name than Fall Out Boy unaware that the crowd, like all of his friends thought the name was fucking hilarious and the fact that replacing a Simpsons quote would be like taking a paintball gun to the Mona Lisa. After much deliberation, Wentz came up with a new name that Stump would later describe as embarrassingly long and awkward to say. What this name was isn’t clear, but looking at pictures of Wentz in those days it’s likely it was an obscure reference to the tombstone of a famous 18th century poet’s cat or some shit.

According to the band, at the start of their their second ever gig, Wentz strutted onto the stage and began announcing their new name, presumably in an comprehensibly ancient tongue that required that consisted solely of consonants, that so bored the audience someone interrupted him to shout “Fuck that, no, you’re Fall Out Boy!“

The rest of the band laughed off the interruption and played their set alongside Rise Against’s Tim McIlrath, who like fucking everyone else loved the name Fall Out Boy. Seeing how positive and enthusiastic the audience reaction was to the name was, the band decided to stop trying to change it and now they write songs for Disney movies. Proof if it was ever needed about just how far you can coast in life by quoting the Simpsons.