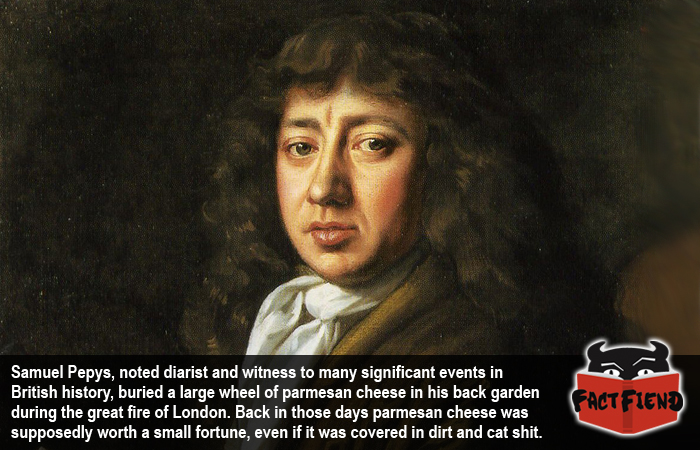 Considering half the people reading this live in a country where you can buy cheese in a can, the idea that it could be worth anything more than an explosive case of future constipation is kind of laughable. But if you go back a few hundred years, cheese was so valuable it was literally one of the first things people would save in a fire.

For example, back in 1666 a famous diarist known as Samuel Pepys was shaken awake by a servant with terrible news, a massive fire (which would later become known as the Great Fire of London) was ravaging the local area. When Pepys asked exactly how local this fire was, the servant presumably pointed to a warm glow in the near-distance. As it so happened, Pepys’ house  and all of his possessions were directly in the path of the blaze.

With the threat of everything he owned being turned into ash or worse, Pepys leapt into action and quickly had the bulk of his most valuable items carted away, even going as far as carrying handfuls of his own things down to a barge himself.

Despite his wealth and status, Pepys didn’t have the means to save all of his belongings from the coming fire and he eventually resorted to burying the possessions that were left in a big hole in his garden, including a big-ass wheel of cheese.

As peculiar as that sounds, Pepys wasn’t an idiot, the cheese he buried was a pristine piece of parmesan, a hard Italian cheese famed for it flavor. Even today, with all of the technological innovations and improvements to delivery infrastructure, a wheel of parmesan will set you back thousands of dollars. So imagine how much a similar sized wheel would cost you back in a time before planes and the internet.

Another thing about parmesan that makes it so valuable is unlike most every other kind of food, parmesan increases in value as it ages, with blocks that are several years old being worth astronomically more than a freshly made one.

In other word, Samuel Pepys wasn’t just burying cheese, he was burying an investment, which wasn’t really necessary in the end because his house wasn’t even damaged in the fire anyway. Ouch.